Through the lock: the Valby boat

For the past year we’ve been exploring stretches of what’s known as Copenhagen harbour, something I find hard to get my head around. For starters, where’s the harbour? As a stretch of water between two bits of land, much reclaimed in stages over the years in a rather haphazard way (they’re still at it in Nordhavn), I’d go with ‘waterfront’ rather than ‘harbour’ as a designation.

Redevelopment has stepped up a gear of late after years of neglect, with shiny new things appearing amongst the crumbling industry. Copenhagen’s largely forgotten heritage as an industrial harbour city is an interesting one, rather different from the fairytale image. Steam ships used to sail to Aalborg, Bornholm and Oslo from Admiral Kaj – there must be any number of stories to tell, but harbour history is thin on the ground.

Accessibility is still an issue, particularly to the south, but Kulturhavn 2014 offered the opportunity to take in some hidden corners. The harbour bus from Den Sorte Diamant/Black Diamond to Teglholmen takes you from inner Copenhagen past the bland office buildings of the now derided Kalvebod Brygge and the latest fashion for stacked boxes on a slant. Thanks goodness for a power station.

this year’s fashion at Havneholmen

The Metropolis building at Sluseholmen looks like a keeper – it may have caused a jarring disconnect on a recent walk at Amager Fælled, but from here its sensual curves are a respite from the rabbit hutch apartment buildings of the sterile canal city and a point of interest contrasting with the happily retained taxi drivers’ beach huts at Bådklubben Valby. It’s big and bold, on its own terms. 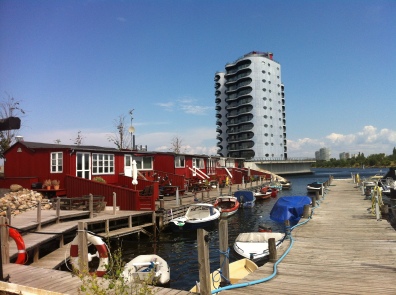 at Sluseholmen you have to really like your neighbours

Bypassing the new developments we are in a classic edgeland – Copenhagen runs out, separated by a lock (Slusen) from Kalvebod bay and Vestegnen. 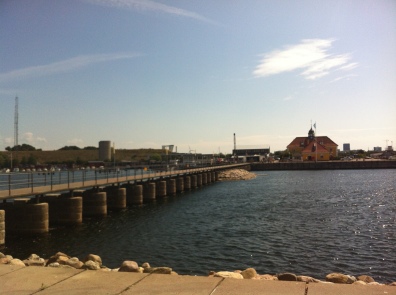 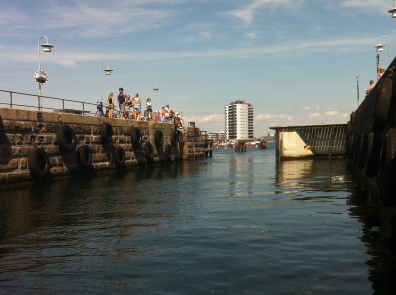 This weekend you could take the Valby boat through the lock, under Sjællandsbroen, past the marinas fringing Valby Park and on to Hvidovre Havn, at the foot of the final bridge to Amager on the other side of the water. Much of the land here is reclaimed and featureless, so it’s a figurative journey perhaps of most significance to locals, including those whose dog walks make this area a regular beat:

the last bridge to Amager 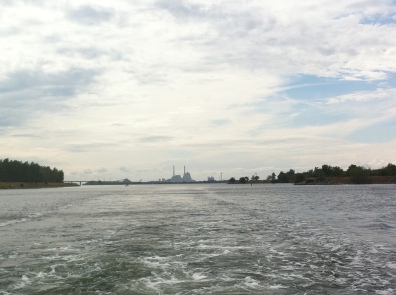 Avedøre power station from the waterside

On return, I walked towards Sydhavn station, through building sites and fenced-off industrial estates, reflecting on when the harbour was a living entity rather than a playground. The Valby boat used to run more than one weekend a year – from 1928-32 Strandgreven sailed from Langebro via Hvidovre to Greve (hence the name) and in some cases the whole way to Køge, five days a week during the summer.

tall ships glide past at Sydhavn