At the Biennale Architettura

what news on the Rialto?

Day 2 in Venice took us to La Biennale, this year in its architectural guise. While the art biennale has been taking place since 1895, its architectural sister has only been running since 1980, with this 14th edition curated by Rem Koolhaas.

The venues are an attraction in themselves. Biennale HQ is Giardini, a park including a large hall housing the main exhibition and 30 national pavilions – Belgium’s was the first to be built in 1907. From 1980 Arsenale has been used as a fringe and overspill venue for countries not represented at Giardini, who may also exhibit in other venues across Venice. The number of countries represented is still growing, with 66 in 2014, 10 of which were exhibiting for the first time.

It’s all a bit Eurovision and tending to the random, with some pavilions subject to care and attention from a national hero (Finland’s timber hut was designed by Alvar Aalto) and others sticking with the neoclassical, on the outside at least.

Arsenale is Venice’s answer to Copenhagen’s Holmen, a complex of former shipyards and armouries off the typical tourist track looking for a 21st century identity. Photo heaven at dusk, after we’d made it through the lengthy exhibition.

On the content side a fine line was walked between the effective and the pretentious – it all depends on where you are coming from and how far you will go. The  main exhibition, elements of architecture (book), explored the historical and current components of 15 items such as the floor, the door, the wall, and was nicely done, but the main event had to be the national pavilions addressing absorbing modernity 1914-2014.

Here’s a round up of some of the national contributions – we had an afternoon, but you could spend days taking it all in. For the record, the Golden Lion went to Korea, with Russia (and Canada) receiving jury prizes. 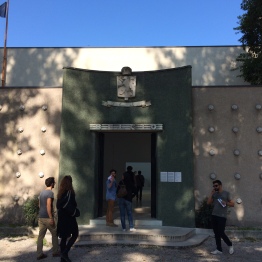 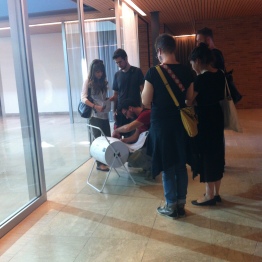 hipsters at the German handout dispenser

Kosovo’s shkami tower, made up of 720 wooden stools

putting some life back into the Russian trade fair