Daša Drndić is a Croatian writer, born in Zagreb in 1946. (Sadly, she died on 5 June 2018. Here’s one appreciation from the Calvert Journal, plus an interview in the Paris Review from 2017. Also: White Review. Latest: lots of plaudits in the 2018 end of year book roundups, in particular for E.E.G. (Gdn)).

Trieste (MacLehose Press; Amazon | Google Books – searchable), first published in 2007 under the title Sonnenschein and in 2012 in English translation by Ellen Elias-Bursać, is a treat (Sunday Times: “the influence of WG Sebald is obvious but not oppressive”). It’s ‘documentary fiction’, with the text including photographs, verse, testimonies from the Nuremberg Trials and other witness accounts, the result of two years of research.

The book opens and closes in Gorizia (Görz, Gorica, Gurize…), around 55km from Trieste, and traces three generations of the family of Haya Tedeschi across time and space in the wake of a series of traumatic events – the First World War and the fall of the Hapsburg Empire, the political and cultural annexation of the multi-lingual and multi-ethnic territories of this corner of Europe under the Kingdom of Italy, the rise of Fascism and the gradual introduction of anti-Jewish laws. (This section of the book is acknowledged in the paperback edition as borrowing heavily from Trieste: the true story, the self published memoir of Fulvia Schiff Gent.)

From 1943-45 9000 Italians were deported from Italy, then under Nazi control. The names of these 9000 are listed over a 40 page stretch of the book, a device described by one reviewer as chopping the book in half. From this point the focus is Haya’s eight year search for her son, fathered by an SS officer but stolen from her as part of the Lebensborn project, presenting first the unadorned results of her research – reminiscences from Nazis, including her lover, the last commandant of Treblinka, and then accounts from the Lebensborn programme. Many Lebensborn children are not aware of their past, but Haya’s son is told of his origins by his German mother on her deathbed and sets out to find his birth mother. This section is written in the first person, and the book closes with a poetic exchange between Haya and Antonio/Herman, echoing the mantra of the book through sections from The Waste Land. We do not witness their meeting.

The experimental style isn’t for everyone. A reviewer on LibraryThing, who ultimately found the book rewarding, says: “It was really difficult to read and at times seemed very disjointed. The mix of fact and fiction with footnotes made it seem like hard work.” For me this is the book’s strength, bringing something new to the holocaust literature canon. The documentary approach leaves space for an accumulation of stories and evidence, such as an account of Lebensborn child Anni-Frid Lyngstad, aka ‘the brunette from Abba’, and a quotes from Austrian dog behaviouralist Konrad Lorenz. Fully digital publication using hypertext could bring even more experimentation, moving beyond a simple list of names or short reminiscence in a form of curational writing.

While we were in Trieste in October we visited the prison camp described in the book, now a national monument. On the fringes of Trieste as it progressively becomes more Slavic (our lunch was a burek from a local bakery), Risiera di San Sabba is understated in presentation and doesn’t really give an idea of the scale of what happened there, a gap filled by the Deportation Records Foundation – more than 25,000 people passed through the camp en route to other camps to the north, while a further 5000 people lost their lives at the camp itself.

The photos we took are eerily similar to those in the book. Who took those photos – the author, Haya, her son? 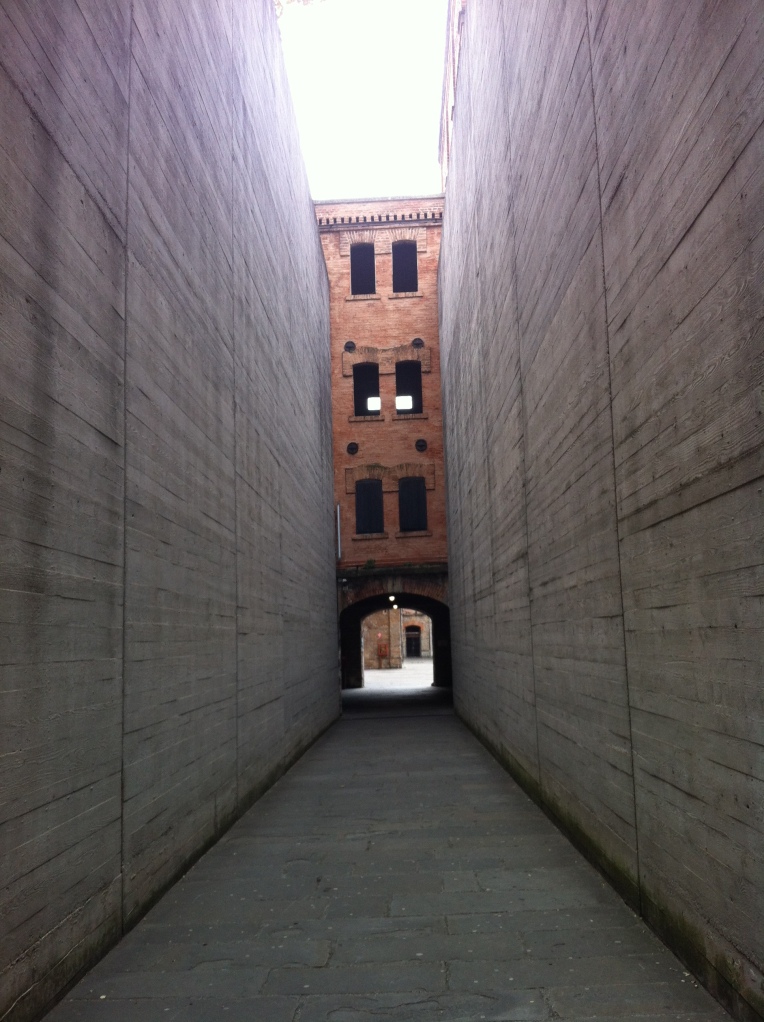