Other people’s countries: the malady of time and place 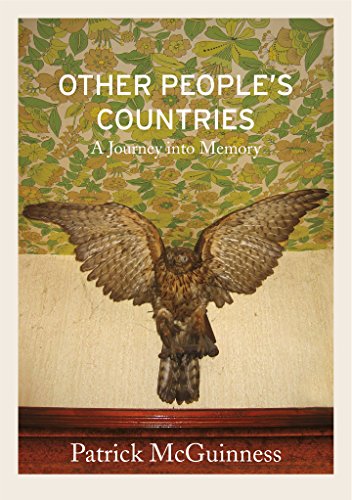 2021 update: in celebration of the publication of Real Oxford (launch & vid; images; in jest; Baudelaire at the Westgate) have reserved Throw me… from the library; while not grabbed by the subject matter PMcG’s writing remains sublime, as witnessed in TORCH’s Book at lunchtime readings…in normal times I’d be buying Real Oxford PDQ, but post-Brexit Post Nord slaps a handling charge on packages from outside The Zone, so we shall see…it will be interesting to see if it gets picked up by the place-writing cognoscenti, and to ponder the parallels with James Attlee’s Isolarion, which i enjoyed very much, despite not ‘knowing’ Oxford…update updated: turns out that Book Depository has found a way of circumventing taxes and charges, so I have now read Real Oxford, exemplary stuff, if lacking some of the drive of Isolarion; like me, PMcG is a fan of SLOAP (start at p134) and is “sceptical of psychogeographical writing…its self-celebrating fascination with ‘sensibility’. That’s because I’m inclined that way myself” (p75).

Updates: PMcG interview in CounterText…extract from The future of nostalgia (Notting Hill Editions comp | Five ways of being)…Real Oxford…What Europeans talk about when they talk about Brexit…Brancusi’s Column for Infinity…

Disarming, eloquent and illuminating, this meditation on place, time and memory, could only have been written by a poet, or a novelist, or a professor. Happily, Patrick McGuinness is all three, and Other People’s Countries is a marvel: a stunning piece of lyrical writing, rich in narrative and character – full of fresh ways of looking at how we grow up, how we start to make sense of the world.

A very special book of short, Proustian pieces on childhood and how the places of our childhood are embedded in us.

It’s a truly lovely thing made up of 50+ short sketches, or dare I say drifts, some from McGuinness’ two previous books of poetry. The book includes those twin devices beloved of curating readers – a dramatis personae and a map of the Walloon town of Bouillon, but no index (another project?). The list of personae includes visitors, tourists and passers-through (“everyone passed through, not many stayed”), including, intriguingly, Gordon Jackson, James Robertson Justice and Jack Warner – I’m sensing war film. We’ll see. In the afterword McGuinness cautions about “things you tell yourself, that you invoke and perform for yourself in order to be and to remain yourself…I misremember all this so vividly it’s as if it only happened yesterday”.

We’re in memory country again, and partly a stranger in a strange land, although less so than Gorra. And memory is tied to place:

When I’m asked about events in my childhood, about my childhood at all, I think mostly of rooms. I think of times as places, with walls and windows and doors.

As for most people, “plenty of nothing” happened, a childhood characterised by Essence of indoors, “that sublimate of all that’s gone”. The family house itself “is now empty most of the year, and sits marinading in its past”.

The cover of the hardback edition (above) shows an owl flying out from a wallpaper of green leaves and flowers, characterising the Ardennais fondness for animal parts, “not just for eating but for home decoration”. The cover for the paperback edition is a stock image of keys, tied up in a metaphor for how you remember the past:

That was memory, I realised: a putty with which you could make another key, which would open the same door, but never quite so well. In no time, you’d be burgling your own past with the slightly off-key key that always got you in though there was less and less to take.

More musings in My suits, a two page meditation on the nature of anticipation: ” I could already imagine myself gone, so that everywhere I went I could only think about what it would be like without me there”, putting a “black border” around days: “even as you live them forwards, you’re looking at them from behind, seeing them as they would be if they were over.” And as an aside:

I think every child tries that experiment where, faced with a date in the future they dread, and believing the old adage about time going faster when you’re busy or having fun, they slow down and avoid enjoying things too much, hoping to put the brakes on Time. This in turn means they don’t enjoy the present, which gives them another thing, other than its pastness, to regret about the past.”

Some sketches are more factual, but with a twist in the tail:

The tone is not donnish, taking unexpected turns on places, feeling at first misplaced but then more personal. References are also made forward to other sketches, giving the book a dynamism not often found in writing in this style.

Growing up with two countries is different from moving to another, although there is clearly much in common, not least a feeling of being adrift, of superimposing time and place. Bouillon is the home of McGuinness’ parallel Belgian self, it is someone else’s country. In Naturalisation he quotes Simenon: “there was no reason for me to be born Belgian”, seeing this as “a refreshing antidote to the usual stridences of belonging”. And Belgian writer William Cliff, not Belgian but “from Belgium”.

What of Gordon Jackson and friends? McGuinness retells the story of Against the wind, a 1946 film, “as it was felt, in that hybrid long-finished but real-time-unfolding present tense that reflects the inside of our lives far better than those three stooges, the past, present and future”.

Two tenses grappling with one instant, one perception:

forgotten as it happens, recalled before it has begun.