Part of a series of posts on my participation in the Walk Exchange’s Walk Studies Training Course – see justification.

I walked to a major road junction around 20 minutes from my home, where extensive works have created a territory in transit. 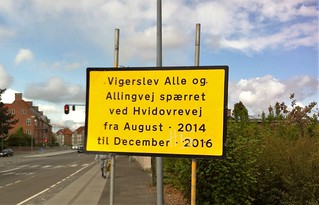 The Copenhagen suburb I live in has no centre, unfolding instead down a 4km road running due south from the western edge of the city to the sea. Other arterial roads slice through the area, although rather fewer run as smoothly from west to east. The area is effectively divided into neatly bound quadrants of family homes and social housing, the end result of just over a century of sporadic development.

Once there was a centre, centred around an ancient settlement, with a church, a market place and a village pond. The area’s first town council rented a room in a house on the market place, a police station and a school were built nearby, and a cinema opened near the pond. But with the laying of the first arterial road in the 1930s, ramrod straight rather than following the terrain like the older roads, things began to change. A railway station was built north of the original centre and a new town hall was built further south.

In 1968 Copenhagen’s western approach road opened close to the site of the cinema, a motorway forging a tunnel between two housing quadrants. Now a high speed railway is being constructed parallel to the motorway. Groundwater works pipe water above the streets. Houses are hidden behind noise barriers. Is this a place? 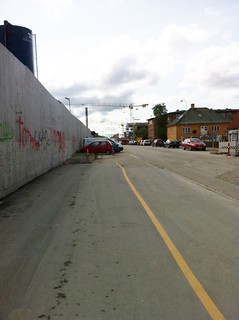 Looking east Copenhagen’s newest ‘skyscraper’, complete with luxury flats for the rich in the iconic Carlsberg area, looms on the horizon. Looking south, plans to create a new ‘centre’ around the town hall have stalled once more. This territory of transit stands for the suburb itself.

Things should improve a little when a 500m stretch of the railway is cut and covered by a tunnel and the road is relaid, however, traffic noise remains a major concern for local residents. 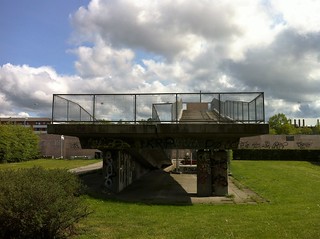 Walk to a territory in transit. Is it more than space? Has it ever been? Does it have a sense of purpose? Look around you – what purposes can you find? Do they relate to your s/p(l)ace?