Channel crossing at the Hook of Holland

Updates: Erich Reich’s The boy in the statue features the Hook of Holland statue on the cover…Paul Scraton’s account of a 2018 ceremony following Frank’s death…Remembering, representing and re-imagining the Kindertransport…Jonathan Lichtenstein’s Berlin shadow (event)…route map (Tim Locke)…The last train to London (event)…Hella Pick (event)…Hidden Europe on the Hoek as a liminal spot

On a chilly day at the end of April we took a train from platform 1 at Rotterdam’s super-shiny new station to the Hook of Holland. Our goal: Frank Meisler’s Kindertransport statue, Channel crossing to life, on Koningin Emmaboulevard. The statue, erected in 2011, is one of five memorials and commemorates the 10,000 Jewish children who crossed the Channel here during 1938–39.

Meisler’s other statues can be found in Berlin, Gdansk, Hamburg and London. They portray a group of five children, posing slightly differently each time. In the Hook they are joined by a sixth child looking out to sea – perhaps Frank himself. 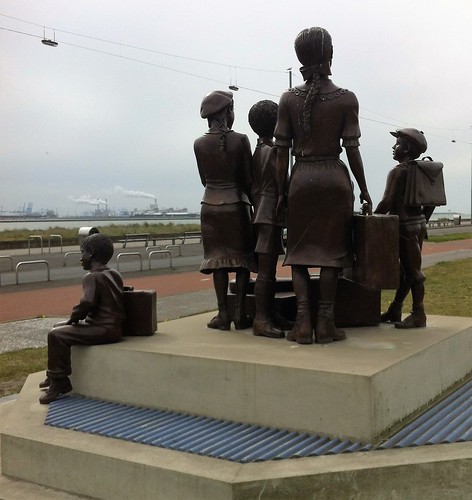 Our interest in the statues and their narrative started in September, when we spotted The Departure (2009) outside KFC by Gdańsk Główny station. We ticked off the London statue, The Arrival (2006), outside Liverpool Street Station in January. Update: The Final Parting (2015), on Dag Hammarskjöld Platz behind Hamburg’s Dammtor station, ticked off almost a year to the day after we saw our first Kindertransport statue. Done! Trains to life, trains to death (2008), at Friedrichstraße station, January 2019.

Inside Liverpool Street Station is a further Kindertransport memorial, Für Das Kind (2003) by Flor Kent, part of a second series of Kindertransport statues. This statue was originally displayed with a collection of objects now in the Imperial War Museum. Further statues in this series can be seen at Vienna Westbahnhof, Beth Shalom in Jerusalem and in Prague.

Monuments to displacement are quite commonplace – on our Dutch trip we also saw Jeff Wall’s Lost Luggage Depot (2001) on the quay in Rotterdam, while without trying I can come with three further examples: Rowan Gillespie’s Famine (1997) on Dublin’s waterfront, the Displaced Gdynian monument (2014) and Kristina (2000) on Amerikakaj in Copenhagen, where emigrant ships once sailed to the USA.

At the Hook it was too cold to do much more than look for the statue, but the town is worth a closer look. Situated at the mouth of the Nieuwe Waterweg canal and administratively part of Rotterdam, there are attractions on offer for both arriving Brits and for locals, branded under the slogan Get hoekt! The beach runs for 18km to Scheveningen, backed by sand dunes boasting foot and cycle paths and a naturist section. For military history buffs there’s Fort Hoek van Holland, a pre WW2 concrete fort tasked with protecting Rotterdam from invasion from the sea (surrendered to the Germans without firing a shot) and an Atlantic Wall Museum.

Ferries have run from eastern England to the Hook since 1893. The train chugs between its two railway stations which stand only 600m apart, the port station of Haven, with four platforms once used for regular international train services to Amsterdam, Germany and beyond, and the rather smaller Strand. From 2017 the stations will become part of Rotterdam’s extensive metro network (2019 update: finally!).

Many have passed through. Patrick Leigh Fermor landed in the Hook at the start of his 1933 journey A time of gifts. Arriving in a taxi at London’s Tower Bridge on a rainy December afternoon, Paddy describes the scene:

I halted on the bridge just short of the first barbican and the driver indicated the flight of stone steps that descended to Irongate Wharf. We were down them in a moment; and beyond the cobbles and the bollards, with the Dutch tricolour beating damply from her poop and a ragged fan of smoke streaming over the river, the Stadthouder Willem rowed at anchor.

The steward serving dinner informs him that boats from the Zuider Zee had been unloading eels between London Bridge and the Tower since the reign of Queen Elizabeth I.

A couple of hours before dawn the Stadthouder Willem drops anchor in the Hook:

Snow covered everything and the flakes blew in a slant across the cones of the lamps and confused the glowing discs that spaced out the untrodden quay. I hadn’t known that Rotterdam was a few miles inland. I was still the only passenger in the train and this solitary entry, under cover of night and hushed by snow, completed the illusion that I was slipping into Rotterdam, and into Europe, through a secret door.

In his 2011/12 retread of Paddy’s journey Nick Hunt boards the Stena Hollandica, a “vessel the size of a small town”. And indeed ships of that scale can be seen ploughing across the Channel and down the canal to Rotterdam, watched over by the boy from the Kindertransport: 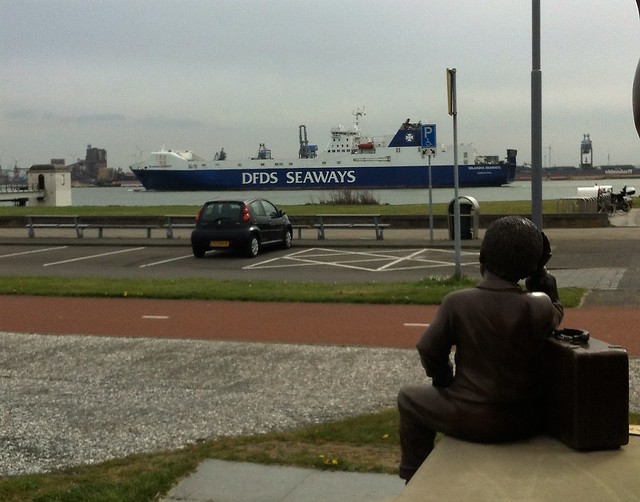 Note: Of Rotterdam itself, Paddy finds “beetling storeys nearly joining overhead” and frozen canals “threading their way through a succession of hump-backed bridges”. The Boompjes, a long quay lined with trees and capstans, gave on a wide arm of the Maas and “an infinity of dim ships”. After fried eggs and coffee and a quick visit to the Groote Kirk, that was it for Rotterdam. “Except for this church, the beautiful city was to be bombed to fragments a few years later. I would have lingered, had I known.”