The 2016 festival explored the 1970s. All very hyggeligt and nostalgic (the cassette! potato printing!) if you actually grew up in that lovely decade. What follows is a summary of events in the areas of literature, art and architecture, plus some general musings.

As a golden entry in Denmark’s tiny place writing corner we have Dan Turèll’s Vangede billeder, published in 1975, on growing up in a 1950s suburb. Urban hero Søren Ulrik Thomsen’s first poems were published in Hvedekorn i 1977, but his first collection City slang wasn’t published until 1981.

Artist Martin Bigum (1966- ) now lives in Frederiksberg, but grew up in Brøndby Strand, finding himself unimpressed by its iconic tower blocks. His vej mod kunsten (journey to art) is described in Min personlige kunsthistorie (key excerpt), with an exhibition at Arken. At the other end of town, Louisiana has a Poul Gernes exhibition (article | guide), highlighting not least his udsmykningsarbejder at Herlev Hospital (1975) and Palads Biografen (rather later). 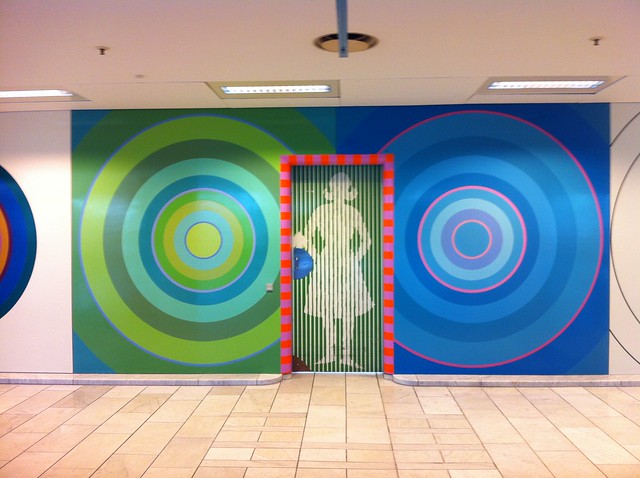 Onwards…1970s architecture was thoroughly chewed over and mainly spat out, with a guide (65 pages, OK-ish at DK 49,95 but with DK 30 postage I’ll wait for the library or try to track it down in a shop, thx all the same) and exhibition on 1970’erne – det forbudte årti:

The guide features 11 buildings, many old favourites, while Politiken highlighted four. All begging to be mapped…update, May 2017: finally got round to having a look at the guide. Subtitled Guide til hovedstadens mest brutale, idealistiske og udskældte arkitektur, it’s nicely produced, with a map and lots of B&W photos. The back cover maintains that it is an “anderledes guide“, showing the 1970s dreams and visions of fælleskab (community) and frihed (freedom) translated into brick and concrete, the decade which architects would rather forget – no mugs or tea towels here. However, the text by Arkitektforeningen’s Karen Dyssel doesn’t really live up to the foreword/blurb. I’d go as far as to suggest that Karen has a sneaking regard for her subject.

Concrete has yet to be treasured in Denmark, and 1970s tower blocks are emphatically not Danish scale, even if at the time they offered the residents of cramped city flats lys og luft in a split new home with all mod-cons. It’s much the same story as the UK, with social problems and some poor quality builds leading to a ‘ghetto’ reputation for the biggest estates, now being refurbished eastern Europe style with colourful stick-on panels.

I went on Frederiksberg’s 1970s bus tour, where the city archivist didn’t even try to hide his dislike of some rather classy housing (but he has written a nice long article). Interesting, if not surprising, to hear that FRB was in the same state as CPH proper in the 1970s – current discourse makes it sound like it has always been a green conservative paradise. The proposed sanering of some areas was met with resistance, as it was in next door Nørrebro.

A bus tour was also offered round Gentofte, Gladsaxe, Lyngby and Rudersdal. In the 1970s the suburbs were the place to be, with the CPH urban area growing by up to 12 km2 per year, and in Denmark as a whole the built-up area doubling. As elsewhere the new-builds were predominantly housing estates and tower blocks, but by the late 1970s ‘low rise high density’ became more popular in an attempt to recreate the Danish landsby, plus a range of experiments into collective living.

BL (Danmarks Almene Boliger), who represent the Danish social housing sector and in 2015 offered a series of events on the tower block as cultural heritage, stepped up to the plate once more with Sunday events on three contrasting estates, complete with langbord lunches: 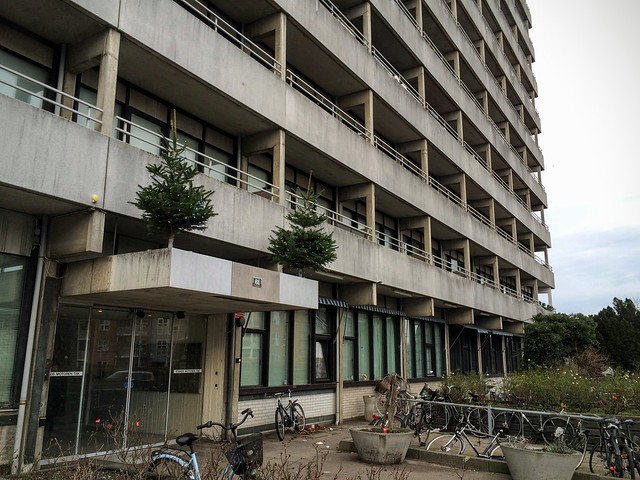 15 storey tower block in Urbanplanen, condemned in 2010 but still standing

Also place related was Konfrontation med 70’erne (Soundcloud), audio at 20 spots around town. I These soundscapes can be a tad uninspiring, but these are rather better than the norm, as is   Last night a DJ saved my life, four podcasts on the story of the 1500 British DJs who kept the disks spinning in provincial Denmark during the 70s (a subgenre of interest is Brit musicians with err…Danish links, from Slade drummer Don Powell to Rick Astley).

The festival benefits from considerable amounts of funding and sponsorship, although state funding is to cease. I’m not entirely surprised, not least because it’s not very clear who the target audience/s is/are, and with over 100 partners and 200+ events it’s hard to work out what’s going on.

Events fall into three categories: something random from a big hitting cultural player tagged with the branding, pricey ‘experiences‘ organised by the festival secretariat for BYTs (in 2015 this included a polterabend and a wedding), and events organised by community organisations. It’s the last which are the most interesting, uncovering areas outside those more usually pimped by Visit Copenhagen, as well as ensuring the festival reaches the entire region.

There are however issues with history and the learning therefrom more broadly, identified by among others Michael Böss in his 2014 book Det demente samfund (Altinget | Politiken). Denmark is a very youth oriented society, and its ‘here and now’ culture constantly reinvents the wheel, fetishising the elements of ‘heritage’ which fit a single Danish national identity and self-image – hence, perhaps, no concrete, and little recognition of diversity or ‘overseas influences’. The country seems to be in a rush forward, neglecting and ignoring the past, at best relegating it to folkelig corner as outmoded and rather quaint. (See the IHR’s History now and then series for more on this.)

In previous years I’ve also got rather worked up by the festival website. There’s a search box but no easy access to search/browse by eg keyword, category, audience, venue. The jaunty design feels extremely tired, even if the massive mugshots, an issue for those not benefiting from ‘good genes’, are accidentally-on-purpose somehow on trend. And don’t go looking for any  social media action or event amplification, as there is none. It all feels rather amateurish. And isn’t it time for a My Golden Days app?

Finally, after going all out with Hello Heritage, “a weekend dedicated to visitors and expats” in 2015, this year there’s no English to be seen.