We’re visiting Paris in the New Year. So this seems like an appropriate time to revisit Walter Benjamin (1892-1940), the touchstone for misplaced migrants and restless walkers, who as it happens also spent some time in Denmark.

Benjamin stayed at Skovsbostrand, Bertolt Brecht‘s house in Svendborg, in the summers of 1934, 1935, 1936 and 1938. In September 1938 he was in Copenhagen, where he obtained some transparencies from a “master tattoo artist”. On 18 September he visited the Brechts in Dragør. He also spent a weekend in Gedser, just across the Baltic from Germany, with Gretel Karplus (later Adorno), between 22-23 September 1934(?).

Like Brecht, Benjamin wasn’t taken with Denmark, finding the southern tip of Fyn “one of the most remote areas you can imagine”, with its “unexploited” nature and lack of links to the modern world a mixed blessing. The summers in Skovsbostrand were isolated and lonely, and drab compared to the likes of Ibiza. Maybe he got on better in Copenhagen.

Obviously every self respecting urban walker has to have a go at walking with Walter, so last year I launched my Copenhagen Arcades Project. First, an aside on arcades. The standard English translation for Walter’s passage, the word arcade evokes something grand, probably glazed, involving arches. Passage: not so much; think back passage, ginnel, jitty, wynd.

With a couple of exceptions Copenhagen’s arcades are definitely passages, or even smutveje (shortcuts), definitely not designed for lingering. Much of the city centre is made up of karréer, a (usually) five storey building complex encircling an inner courtyard, a space somewhere between public and private. This part of the cityscape is hidden from view, unvisited by the passer-by. A smutvej can open up this terrain.

Having said that, our first stop, August Bournonvilles Passage, is already an anomaly. Named in 2005 when the stretch was pedestrianised, this shortest of shortcuts is most notable for Stærekassen, a chunk of Art Deco built for Statsradiofoni (now part of DR) in 1931. Its mosaic roof portrays four cultural worthies, Hans Christian Andersen, Johannes V Jensen, Carl Nielsen and Adam Oehlenschläger, with the last also to be found as a statue just round the corner.

Walking past Nyhavn and up Bredgade brings us to Sankt Annæ Passage, between two of the city’s most fornemme (exclusive) streets. Opposite the eponymous plads, this passage is promising from the outside with a wrought iron sign, but disappoints within, mainly giving access to offices housed in the courtyards. 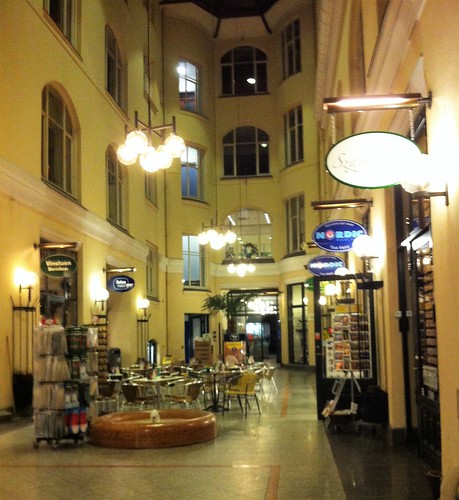 Emerging out of the far end of the passage brings us onto Store Kongensgade. A short stroll back towards the city’s main shopping drag of Strøget takes us to Pistolstræde. Glazed over in a recent refurbishment with smart signage, this web of backstreets is populated by shops and cafes mainly at the luxury end of the spectrum, and feels a tad self-conscious. How do these shops stay in business? There’s never anyone in them. (One answer: they move to the suburbs. Konditori Antoinette moved to Hvidovrevej, just down the road from us, in August, and feels a bit out of place.)

Finally, time for the real thing! Five blocks further down Strøget lies Jorcks Passage, as good as it gets. Built between 1893 and 1895 by Vilhelm Dahlerup, responsible for countless Historicist buildings in the city, this arcade is worthy of the name, housing a pleasingly eclectic range of premises as well as mini toddler statues in bays along the walls. 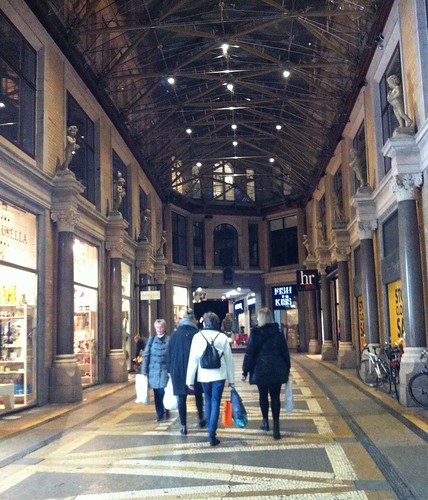 The buildings surrounding the arcade link back to our first smutvej, with DR broadcasting their first radio programmes from the premises in 1924, and forward to our last. KTAS (now TDC) opened their first telephone exchange here in 1896. It remained in operation for a scant 13 years, replaced by Telefonhuset at Nørregade 21. This lasted 5o years, from 1909 until 1959, before moving to Borups Allé 43. That building is still owned by TDC, although their current HQ is at Sydhavn.

Left behind is Sankt Petri Passage, allegedly offering public access through the karréer from Nørregade to Larslejsstræde, although it has always presented me nothing more than a massively closed wooden door.

What other options are on offer today for the city centre flâneur? In his Travels through Germany Michael Gorra “subjects the shopping arcades of contemporary German cities to the terms of Benjamin’s Arcade project”:

Most German cities have reconfigured their central shopping districts into pedestrian zones, in a way that makes the arcade seem merely an extension of the street itself, a space far less odd and magical than it had been for Benjamin, liminal only in the way it opens onto an underground parking garage.

In Malled: 60 years of under cover shopping Will Self describes shopping centres as non-spaces, abolishing time and space (is a table outside a cafe in a mall inside or outside?). With a limited retail offering they are all the same, places where nothing happens by accident. The design ensures that you can only progress forward, slowly, encountering a series of fixed scenarios and then moving on.

Benjamin’s arcades were designed for shopping and strolling, places to see and be seen. For me Copenhagen’s central shopping district offers little room for flâneurie, celebrated for its early pedestrianisation but lacking the brio of the passeggiata. Likewise its malls lack allure, with Fields, once the largest shopping centre in Scandinavia, rising in a grey desert and neighbourhood centres built in the 1950s and 60s tending to the functional.

When I think ‘arcade’ I’m at Glasgow’s Argyle Street or Birmingham’s Great Western Arcade, and before you know it you are in a something shiny like Princes Square. So my arcade of choice is instead the heart-achingly stunning Párizsi Udvar in Budapest, currently in need of restoration and resembling rather more a cathedral. 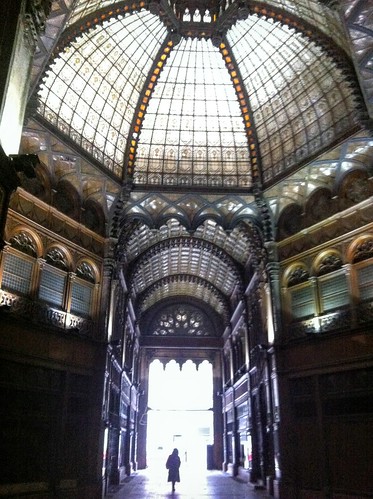 Benjamin started his research for what is known in English as The Arcades Project in 1927, before he moved to Paris in 1933. When he left in 1940 he entrusted the result, a vast compendium of notes and reflections assembled from a range of sources and arranged in 36 categories with multiple cross-references, to his friend Georges Bataille, then working at the Bibliothèque Nationale. What could Walter have done with a database package and a customised taxonomy?

Much has been postulated about this approach to writing, which Benjamin himself called ‘literary montage’. As “the strolling spectator who collects mental notes taken on leisurely city walks and transcribes them into written form…he does not just write about the flâneur but he writes as a flâneur” (source). Further, “to read Benjamin’s key work is in itself analogous to the practice of flâneurie” (source).

Certainly his methodology can bring some comfort to every writer of endless drafts (I’ve had this post in my drafts for more than a year) and random notetaker – to what extent is The Arcades Project Walter’s notebook? He himself expected his research to result in a small article, polished off in a couple of weeks, and did at least succeed in siphoning bits off into published essays. His exhaustive approach can perhaps also shed new light on issues of #curationism.

But still, his belief that you don’t properly understand something unless it passes bodily through you rings very true: if you are blocked, write out your work again, in a fair copy. In that process something will happen, new connections will surface as you quote yourself, a different person in time and space. It’s like going for a walk and seeing things more clearly.

From a 1929 essay, quoted by Edmund White in The flâneur (full quote):

The flâneur is the creation of Paris. The wonder is that it was not Rome. But perhaps in Rome even dreaming is forced to move along streets that are too well-paved…The great reminiscences, the historical frissons – these are all so much junk to the flâneur, who is happy to leave them to the tourist.

The flâneur is in search of experience, not knowledge. Most experience ends up interpreted as – and replaced by – knowledge, but for the flâneur the experience remains somehow pure, useless, raw…Practical Romans…show no curiosity about their city’s past…Parisians are the ones who wander their own city.

We’ll see how we get on.

Updates: enjoyed Stuart Jeffries’ Grand Hotel Abyss, not least to follow up on WB’s Frankfurt years (my own: 1982-83) – he presented (and withdrew) his post-doctoral dissertation to the Germanistik department at the university in 1925…WestMarket, Copenhagen’s new food market, essentially an arcade…In our time (R4, 2022), esp for extensive linkage

True to Walter Benjamin’s words, ‘a text is different when it is read from when it is copied out’ (trans. by E. Jephcott and K. Shorter), today in Process and Product in Translation we are copying out an excerpt from Ali Smith’s Autumn. pic.twitter.com/BjIjJvyaDP

One thought on “A Walter Benjamin moment”