An urbanist’s trip to Paris

I’ve lost count how many times I’ve been to Paris. In a world before budget airlines Paris nudged Bruges as first stop for Brits venturing onto the Continent. My first visit was in 1980, in a sponsored student hitch from Bristol. I also have evidence of a 1982 visit, part of a summer hitch round Europe, with photos from the top of Samaritaine looking towards La Défense and Sacré-Cœur. After that things went very German, but I was there again in 1992 with my mother, when we visited the Musée d’Orsay and Versailles, and went for a boat trip on the Seine past La Défense, at that time dominated by something angular and shiny. I can also come up with a couple of short stops in the 1980s, and I was there some time in the 1990s for a conference.

Never took to it – too French. So for our New Year 2017 trip we honed in on themes of interest rather than revisiting the tourist classics, in a three step urbanist’s Paris programme.

What is Paris, anyway? CityMetric’s Jon Elledge has engaged with this at length, with, obv, London as baseline. He reveals just how small the City of Lights actually is:

Paris – the maroon pimple in the very middle?

Paris ‘proper’, as in the area within the périphérique ring road, is only six miles across, smaller than inner London. Venturing beyond tourist hotspots quickly brings you to suburbs (and the too often notorious banlieues) with their own councils. This has an effect on development, take it from me, living just outside Copenhagen ‘proper’. The creation of the Metropole du Grand Paris in 2016 (2019 update), covering the city and its suburbs in an area bigger than Greater London, may “help to reintegrate the banlieues and make the city work better”.

It’s all about density and taut town planning. Paris is one of the densest cities in the western world, with an average of 21,500 people per km2 compared with London’s 5000. Dubbed a ‘horizontal city’ by UNESCO, it is emphatically low rise, high density, dominated by buildings of four to six storeys.

The satellite view of Paris displays a homogeneous mass, divided by laterals and diagonals, interspersed by the odd circle:

The inauguration of the Boulevard Périphérique in 1973 created a further physical and mental boundary between Paris, and not-Paris. While restrictions on building height and a policy of facadism means that the city ‘proper’ has largely maintained its Haussmann era appearance, this “small, beautiful city is surrounded by all of the messy, lively and less-than-pristine stuff that it does not want to process” (source), socially segregated with a central ghetto for the rich. The less elegaic urbanist press notes that Paris may even be in decline, a ville musée, with anything edgy pushed to the fringes – and other than the odd grand projet, that’s where where the interesting stuff is to be found.

All this goes some way to explain my issues with the place. As you wander down the interchangeable streets, past yet another lovely square, thing start to blur and fall out of time, an endless parade of cafés offering the same plats du jour and boulangeries giving birth to people hurrying home with a baguette…in some ways then, comforting compared with sterile Scandi, but ultimately unchallenging, lacking eccentricity and in places just too conformist.

And cars, cars, cars. If the empty post-nuclear holocaust feel of central Copenhagen is the way to go, Paris has a problem. Queuing to take a selfie at the Arc de Triomphe in wedged between four lanes of French drivers may be one explanation for .

Paris 1928: a city that attracted people dreaming of a better world after World War 1. This was the year when the surrealists Magritte, Dalí and Buñuel brought their bizarre new vision to the people, and when émigré writers and musicians such as Ernest Hemingway and George Gershwin came looking for inspiration.

Paris in 1928 was where black musicians and dancers like Josephine Baker found adulation, where Cole Porter took time off from partying to write Let’s Do It, and where radical architect Le Corbusier planned a modernist utopia that involved pulling down much of Paris itself.

It’s a bit like Vienna 1908, “when Freud waved cheerily from a tram at Schiele and the Second Vienna School sang a capella to delighted cafe-goers”. Among old friends we find Samuel Beckett, James Joyce (who arrived in 1920 at the invitation of Ezra Pound, supposedly for a week, but ended up living there until his death), Ernest Hemingway (whose posthumous Moveable feast has unexpectedly regained popularity – see Being Human 2016) and Peggy Guggenheim.

There’s also a clutch of Scandis and related, not least Rilke, whose only novel, The notebooks of Malte Laurids Brigge (1910), is the narrative of a destitute young Danish poet wandering around Paris and hoping to write, plus a pair of Danish sculptors, Astrid Noack of Norrebro’s Atelier fame, in town between 1920-29, and Sonja Ferlov Mancoba (vid), member of CoBrA. Robert Jacobsen (again; more sculpture, CoBrA fringe) and Richard Mortensen (painter), who feature the sort of Danish names it’s impossible to differentiate, were both in Paris between 1947-69, and now have side-by-side streets named after them in Ørestad Syd. Update: Inger Christensen also stopped by.

The big beast though is polymath Asger Jorn (1914-73), in town briefly during 1936-37 and working with Le Corbusier on the Pavillon des Temps Nouveaux for the forthcoming World Exposition. Jorn contrasted Corb’s rationalist approach with the more ‘spontaneous’ ideas associated with the Danish and Scandinavian traditions, moving on to become a founder member of both CoBrA and the Situationist International.

Despite the above overflødighedshorn we confined ourselves to a quick peek at Walter Benjamin’s plaque before retracing parts of Simone de Beavoir’s regular stroll from Montparnasse to St-Germain-des-Prés.

The Boulevard du Montparnasse isn’t what it was, with le jazz hot and l’existentialism froid not much in evidence (source). Instead doormen prevent curious entry to cafés such as Le Select, La Coupole and La Rotonde, above which SdB was born. Both Le Dôme, where SdB edited Sartre’s Being and nothingness, and Café de Flore, where she wrote two essays, a novel and a play by the stove during WW2, were fully occupied by the sort of tourists who favour a full lunch.

You’ll find Les Deux Magots (pics; Magots as in Chinese figurines…), an Existentialist haunt also favoured by Samuel Beckett which has awarded its own literary prize since 1933, next door to Louis Vuitton. We moved on, to a rather more successful turn around Perec’s place.

Where I get excited by a fleeting connection with Rachmaninoff in Gentofte, in Paris, as in London, there’s an endless web of connections to unpick – see 19 Quai Voltaire and the Café de la Mairie. Going a step further is Rue Watt, named after Scottish inventor James Watt and in its wrought iron incarnation featuring in a song, a film and two novels. 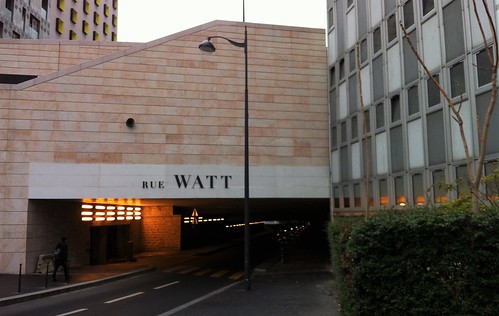 Architecture for me starts with Art Deco. Paris’ Art Nouveau confections are like pralines, too rich for every day and cloying en masse. With the aim of escaping the false utopias of the culture industry we explored Cité U, founded in 1925 in a spirit of peace, unity and friendly cooperation, with 40 residences from around the world (top picks: Germany and the Netherlands).

Le Corbusier may not have achieved a Haussmann-style remake of the city, however his UNESCO recognised Paris traces include Immeuble Molitor, an apartment building conforming to four of his five points of architecture. Corb’s last home is on the top floor, overlooking the Parc de Princes and a short stroll from Roland Garros.

We spent three nights on the edge of La Défense. Initiated in 1958 by a team of visionary architects as a modern business district for Paris, its first building is one of its most impressive. 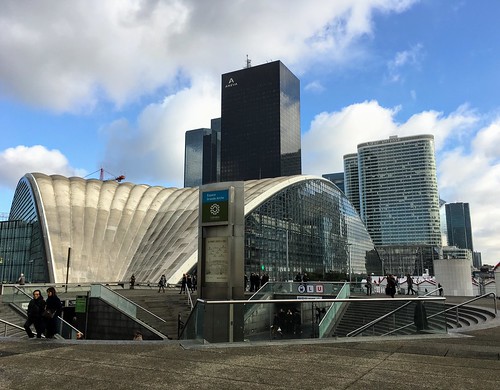 Making a rather bigger statement is the Grande Arche from 1989, at the westernmost point of the Axe historique (Diamond Geezer), connecting it physically and visually to the city. The architect, Johann Otto von Spreckelsen, who died two years before the inauguration, is also responsible for Hvidovre’s Sankt Nikolaj Kirke, on a rather different scale.

With pedestrians and motorists strictly separated as advocated by Corb, it’s more Barbican than City. The central pedestrian promenade impresses, with some striking artworks, while less impressive are the individual skyscrapers, which lack the interest of those in London or Rotterdam. They work rather better as a group and at night. 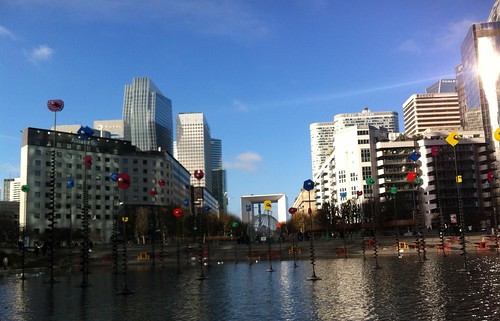 La Défense from the ‘near’ end of the Esplanade

Some rather more exciting architecture can be found in the nearby grands ensembles of Courbevoie and Nanterre, both neighbouring communes half in, half out of La Défense.

Outside Paris ‘proper’ meaning less money for renovation has left Courbevoie’s concrete Charras, dating from around the same time as the first now glass and steel towers a few streets away, untouched since the 1960s. Both Les Damiers, four nearby Brutalist ziggurats, and Nanterre’s Cité Pablo Picasso (or Tours Nuages), consisting of 18 towers with a total of 1607 apartments, provide further provocations to a future forever just around the corner. 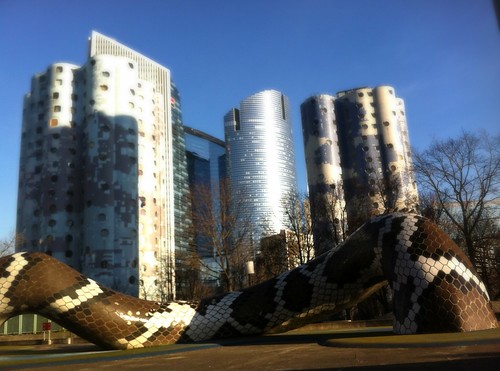 Tours Nuages, a big snake and a glimpse of La Défense

More utopias…President Mitterand commissioned a slate of grand projets in a programme aimed at revitalising the city in 1982. Many of the projects were constructed on the working class eastern side of Paris, bringing a re-emphasis to the Seine, but the usual trinity of costs, over-runs and operational issues caused controversy. Mitterand’s eight buildings include the baffling Bibliothèque nationale, four glass buildings designed to resemble open books, and the Ministère de l’économie et des finances, a 70m long piece of PoMo not unlike a motorway tollgate (height restrictions precluded the construction of a tower).

Contemporary prestige projects, redeveloped as part of the Paris Rive Gauche (map & booklet; previously Seine Rive Gauche) initiative, include Les Docks, which couldn’t be more French, and Les Grand Moulins, which we managed to miss due to approaching the ‘back’ way.

An initiative commissioned in 1985 on 130 hectares of land previously owned by SNCF between the railway tracks of the Gare d’Austerlitz and the Seine, Paris Rive Gauche is the largest development project since Haussmann’s time. It accommodates approximately 15,000 residents, 50,000 employees, and 30,000 students and staff from the Paris Diderot University, with the Avenue de France a 40m broad artery.

We explored the Masséna district, made up of several neighbourhoods each coordinated by a different architect. Masséna Nord, launched in 1995, includes Les Grand Moulins, now part of the university, as well as some innovative housing based on coordinating architect Christian de Portzamparc‘s theory of the ‘open block’ (îlot ouvert), with free-standing blocks designed on principles of diversity and contrast. Here height regulations have been relaxed to allow buildings of 50m for residential purposes and 150m for non-residential purposes. 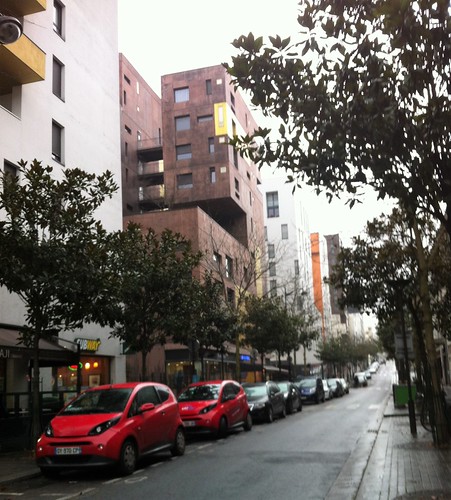 Streetnaming here is delightful, focusing on important people of the 20th century, with a Rue Elsa Morante and a Thomas Mann school, a Rue Olivier Messiaen and a Rue René Goscinny (decorated with call-outs from his cartoon that have already become local attractions).