People vs place in Copenhagen

On 4 April I attended Guardian-alike Politiken’s event Byen mærker os (“the city marks us”), where three speakers, moderated by Marcus Rubin, engaged in a conversation about people and place in Copenhagen. The event was framed around the assertion that the city marks us – and we mark it – through its buildings and the spaces inbetween. Urban space (byrum) affects both our moods and the way we experience the city.

Copenhagen’s egenart may be celebrated abroad, but there’s a prevailing discourse centred around the idea of a ‘generous city’ (generøs by) which I find problematic. Would the event present any challenges to the one-note Happy Copenhagen image?

The speakers each presented four slides showing places they either loved or hated. First up, Martin Zerlang, professor in literature and modern culture at KU and go-to academic on matters urban. He drew gasps by kicking off with the assertion that it is not people who make a city, but rather both people and place, the interplay between them and the stories they tell, such as a bollard on a road marking the spot where a doomed wedding party fell into a lake.

His ‘love’ examples were the Enghave Småhuse threatened with demolition and (predictably) Cykelslangen, while his bile was directed at balconies which don’t fit in (and, more often than not given the weather, never have anyone sitting on them) and Rem Koolhaas’ BLOX. Koolhaas’ “f*** context” approach has resulted in a building which blocks Slotsholmen and Christian IV’s buildings from view, while giving nothing back.

Next, Christian Pagh, partner in kulturdesignbureauet Urgent.Agency “with substantial experience in turning site-specific qualities into creative and value-adding design solutions”. For Christian it’s all about people – his loves were quirky architecture in Christiania and a celebration of Sankt Hans Aften in Christianshavn, with late lamented pop-ups in Carlsberg Byen thrown in for good measure.

He then proved wholly unoriginal in castigating a building at Kalvebod Brygge (can we have a moratorium now please, in particular in ibyen’s Min by column; heck, it’s just a few office buildings and a hotel) for ‘closing down’ the harbour, and UCC at Carlsberg for looking like it could be in Hamburg (? their new developments are rather more interesting), with the supposedly slim Bohrs Tårn that isn’t.

Last, and the main draw for me, canonical poet of the city Søren Ulrik Thomsen, who from his first collection City Slang (1981) onwards has placed the city at the centre of his work. He didn’t disappoint, coming up with a bunch of one-liners plus a well-placed quote from Theodor Adorno.

Just what is a city for? Growing up outside Copenhagen he wanted something more – anonymity, urbanity, grit…different things going on, different people living different lives, space to be yourself and do your own thing. He is often criticised for indulging in nostalgia, but for him the past provides the fuel for thinking about today, giving pointers to where we could be going wrong.

Copenhagen’s council helmed developments are turning the city into a big village – the very thing he wanted to get away from – planned to the nth degree to facilitate one sanctioned lifestyle supporting an experience economy where everything is fælles (for and of the community). He is particularly down on andelsboligforeninger (institutionalised collectively owned housing) with their langbord dinners and organised events, but also on carfree streets and semi-private gårdhaver (courtyards).

With the current pace of building large areas of the city will be forever date-stamped State of the Art 2017, uniform and lacking diversity, dominated by the most affluent. Where once a mix of traffic and people created buzz, now all is empty and trist, an ideologically driven hyggehelved inhabited by the rekreativ klass (the logical development of the creative class), who leave few traces. Where is place in this scenario?

SUT expounding his theory of the hyggehelvede (while most cultures have a couthy tendency only in Denmark is it a cornerstone of national identity, and even architecture)

After a short break our panel discussed how we should respond to the development of the city, and how we can (learn to) live with the pace of change. Three hot topics:

There was consensus around the need for more social diversity through the building of truly affordable homes (billige rather than almene boliger), if rather less on SUT’s other remedy – more traffic to create buzz, even if it might bring the dividend of improving cyclists’ bad behaviour.

The generous city prevails, as seen in the portfolio of tours planned for DAC’s 2017 summer season, including Carlsberg, where listed buildings are remade without a backward glance, skyscraper-spotting by bike (article), and a trip round the former harbour, now a rekreativt byrum:

(Copenhagen’s harbour is synonymous with the growth of the city and its increasing prosperity, in relation to its population, architecture, housing market, infrastructure, culture and Liveability.)

Amen to that. Everywhere Martin’s hyggelige (nostalgic?) stories are hidden from view in the history-free city. Every year there are fewer layers to unpick or places to discover, with everyone the same and doing the same thing, leaving few unique traces. Copenhagen is increasingly a city devoid of grandeur and aspiration, grit or buzz, all the things that make a city urbane. Blink and it could be a giant theme park for the extraction of money.

I am guilty as charged on a city being somewhere you go to use and then come home. Growing up in a middle class Edinburgh suburb with plenty of space the city centre was where people at the extremes of the social scale lived, while I took the bus “into town” for any number of other reasons. It offered (and I trust still does) rather more than housing, events and coffee shops – even offices and hotels.

Another of DAC’s summer tours is taking on this style of place in Copenhagen. Metropolzonen (a name which has been quietly dropped) stretches from the Lakes to the harbour. A central area rich and resonant in space and place, inspiring and exciting, used by thousands every day, but which DAC claims is a “no man’s land which very few have a relationship with”. This doesn’t play in a lifestyle city, so things are about to change, with the area to be transformed fra transit til ophold. As SUT would say, it’s Adorno’s Sundhed til døden (The health unto death, riffing on Kierkegaard’s The sickness unto death) come to life. 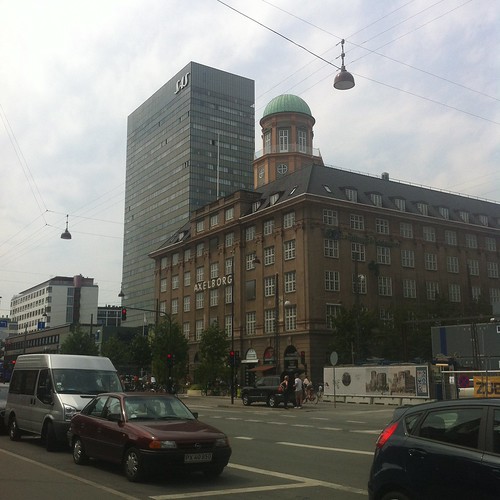