My Twitter bubble keeps serving up interesting events elsewhere offering food for thought to compare with the local summer festival scene. Some common themes keep coming up as well – it’s all quite inspirational. So, here’s the first in a series of posts on events #not_here, looking at the Edinburgh Festival of Cycling (@edfoc).

I grew up Edinburgh, for me the archetypal walking city. I biked as a student, in Bristol and Frankfurt, and ever since have chosen not to, not really a radical lifestyle choice even in (or just outside) Copenhagen. In the same way as hygge and those happy Danes, the picture painted of cycling in CPH is seen through a rather rosy lens, obscuring any number of cultural (and geographic) differences. EdFoC portrays some of these differences, even if it is suffering from a dose of Scandimania.

Unsurprisingly, there was nary a mention of walking on the programme (shared space issues! entitlement!!) – OTOH it’s a relief not to have it conflated as a sort of second best. As it happens the council does a pretty good job IRT walking, vs its near-invisibility in CPH. (The comparatively low number of pedestrian journeys in CPH is generally waved away as why would you, if you can cycle? The high cost of public transport, particularly for impromptu short trips, surely also plays a role.)

The festival is aimed at ‘all types’ of cyclist, but a lot of events involved challenge style riding/touring, some for charity but others aimed more at self-empowerment – maybe this sort of thing goes on in CPH, but if it does it’s passed me by (although grim-faced lycra-clad MAMIL groups do plague both paths and country roads at weekends).

A couple of these events did however capture my imagination – the Ride to the Sun (@RidetotheSun) from Carlisle to Cramond for the summer solstice (over 1000 participated) and the Night Ride the week before. Cycling can be more than a convenient means of transport after all…

Looks like a fabulous night ahead for our @edfoc NightRide… all registration paperwork etc packed, heading off for @LeithCycleCo /@tracygriffen studio shortly 😊🚴‍♀️
Riders are in for a treat with a new mystery mid-way stop for food & rest, in deepest darkest #EastLothian 😉 pic.twitter.com/NATCaH5mjI

Guided ride offerings were mainly on the pricey side and in tourist corner (an Outlander location tour, anyone?), so I was happy to note the free event exploring Edinburgh’s 20th century buildings, with accompanying fab pic. A shout-out too to the UNESCO Chair Refugee Cycle, held as part of Refugee Week and a Summer Fun Day in Glasgow. (Noted also that good works are clearly done by Bike for Good and Bikes for Refugees.)

Danish envy aplenty however behind the cry to Copenhagenize Scotland, cancelled on this occasion due to high priest Morten Kabell falling ill; the grass isn’t always greener, folks. Some Celticization of Denmark wouldn’t go amiss, if only Scots (and Brits) could drop the habit of constantly running themselves doon in the name of self-irony.

Meanwhile pressure group Spokes (@SpokesLothian), celebrating its 40th anniversary, seems to at least equal @copenhagenizers in their zeal to transform the city, here’s hoping they don’t go the full Gehl. A tram is a better place to start, even if it stops just after tackling its first hill.

Literature got a look-in with the on-point Women’s Read and Ride tour (event), and EdFoc even runs a writing competition – for me one of the 2017 winners gets a special prize just for the multi-layered title of her story, Freedom of movement. Bless her.

Are events similar to EdFoC held in DK? I tend to avert my eyes from the self-congratulatory cycling discourse hereabouts, but I can’t help noticing that in Scotland it’s all rather different, and definitely made from girders – see Conquer Kaimes, cycling up this 9% gradient demon… 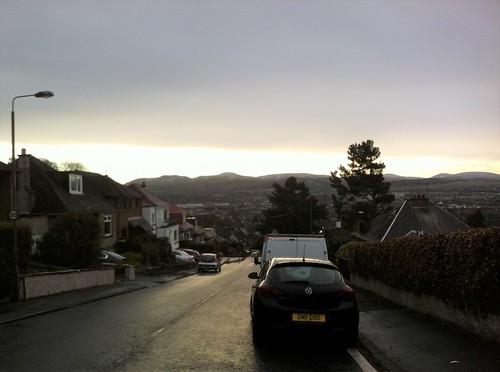 my breathless pic from Nov 2017, after walking (almost) to the top of Kaimes Road

So, a festival embracing diversity, with events featuring both lycra and cake (probably not together), people doing things for themselves, and lots of different ways of answering the question. Edinburgh has all the Copenhagen it needs.

Next up, and staying in Edinburgh, ArchiFringe.

Kudos to all the cyclists riding up and down the hills of Edinburgh. They deserve their own festival, and @edfoc puts on a great list of events https://t.co/aSQNMuz3AD. Would love to see even just a weekend of events like this in #BurlON #HamOnt