The overall theme of this year’s Vestegnens Kulturuge was between light and shade, bringing us an Ole Rømer sound and light show (review) at Taastrup Bibliotek (plus exhibition and lecture), tours of Taastrupgaard Museum and 1950s Vridsløselille, and an evening walk down Hvidovrevej with Benn Q Holm to investigate Hvidovre’s identity.

Vestegnens KulturCast was back, this year interviewing local volunteers. Also on offer was the first ever glossy festival mag, with stories from kendisser who grew up in the area – once upon a time, everyone grew up in the suburbs.

This year’s thing was nests (FB), with six birds’ nests constructed by Veronica Hodges over the course of the summer. Each kommune was represented by a bird, and some of the nests were decorated with papercuts, but overall they lacked the impact of either Thomas Dambo’s giants or the on-trend artistic chops of last year’s containers. And despite mainly to be found in central locations, none looked much visited.

We made our now traditional road-trip around the six locations, taking the nests in two tranches to gain a ‘nested’ view of six kommuner one weekend in September.

Rødovre’s nest is to be found in the garden of Heerups Museum at the historical heart of the kommune, and is in the shape of a viber, the lapwing which swims in the nearby (also bird-shaped) Damhussøen lake. Abutting the Copenhagen suburb of Vanløse, like my ‘home’ kommune of Hvidovre, Rødovre is a classic dormitory town dominated by social housing, but thanks to the efforts of an ambitious mayor has some points of interest in the shape of a tranche of public buildings by Arne Jacobsen, no less, and Denmark’s first shopping centre.

From the fringes of Copenhagen we forged our way down Roskildevej, straight through the kommuner of Brøndby and Glostrup, who no longer participate in the kulturuge, and bypassing Albertslund for now, to reach Høje-Taastrup (sic). Five kommuner in the space of just over 10km and 15 minutes, that must be some sort of record, and probably made sense back in the day. But do the differences go further than the street furniture?

Taastrup’s blackbird’s nest is in a rather more urban setting, outside the newly opened Medborgerhus beneath the railway line built in 1847 around which the town grew up. While Taastrup now rubs shoulders with the new town of Høje Taastrup (estd. 1978), it retains the feel of the market towns found elsewhere on Sjælland, with a tree-lined main street and small shops. With banners over the street promoting the Ole Rømer connection there was a festive feel about the place.

From the edge of Vestegnen we backtracked to Albertslund, which always presents well. Built to a 1957 master plan, Albertslund’s coat of arms features a cockerel, and a family of swans had taken over the lake, however the nest is named for the isfugl (kingfisher), and can be found opposite the town hall. Home to 28K inhabitants and 106 nationalities the town is out of step with the prevailing image of Denmark 2018, but the area around its civic buildings is evocative of an era of bigger aspirations. The nest, built on its own small island, was closed for unexplained reasons.

Continuing south brings you to Vallensbæk, one of Denmark’s smallest kommuner both by area and population. On Vestegnen it distinguishes itself for voting Conservative; with a housing stock made up almost exclusively of homeowners it straddles a brace of motorways within touching distance of the tower blocks of Brøndby Strand. A svane (swan) graces the communal coat of arms, and its nest was equally neat and tidy, located in a newly landscaped grønne strøg running south from the station to the marina. They like a bit of relandscaping in Vallensbæk – see also the confusing juggling of Gammel Køge Landevej where it meets the O3 ring road, an attempt to turn it back into a country road.

From there we backtracked west to Ishøj, like Taastrup verging into the countryside, but with a rather different identity. With one of the highest proportions of non-ethnic Danes in the country, Ishøj-the-town is dominated by social housing and has a centre dating from 1977. Emphatically planned for shoppers loading their wares into the car from an underground car park, it’s not beagle-friendly, but redeems itself by boldly making no concessions other than some yellow sunshades. We finally found our way to the library garden where an avocet’s (klyde) nest lurks in a corner. An avocet, in Ishøj?? A sparrow, maybe.

All of which brought us back to Hvidovre, which for all its quests for identity is the true dormitory suburb, seemingly asleep for the past decade, with no development noted at all. A swallow’s (svale) nest stands in the garden of the Rytterskole in what remains of the historic heart of the kommune, which could have been Hvidovre’s centre, yada yada, and but for a brace of bad luck (not included in Copenhagen’s 1901 land grab) and bad decisions (a council functionary who commanded riv det gamle lortt ned). As things stand it’s just too close to Valby to make sense as a separate entity, split by a motorway and lacking the dynamism seen in Rødovre, rather more at the heart of things if only a couple of kilometres further north.

Vestegnen’s mini-towns can be seen as analagous with the UK’s new towns, if – as ever – on a different scale. Sometimes referred to as Copenhagen suburbs, they are slowly developing a sense of place, while still merging into each other as classic sprawl, awkwardly bissected by traffic arteries leading elsewhere.

We also took in a new artwork, Vallensbæk’s Gænger (Runners; vid), which lights up at night driven by the power of people crossing the cycle- and footbridge over the ring road. Or at least should do when the bridge is finished – we were shooed off by JCBs engaged in resurfacing the thing. 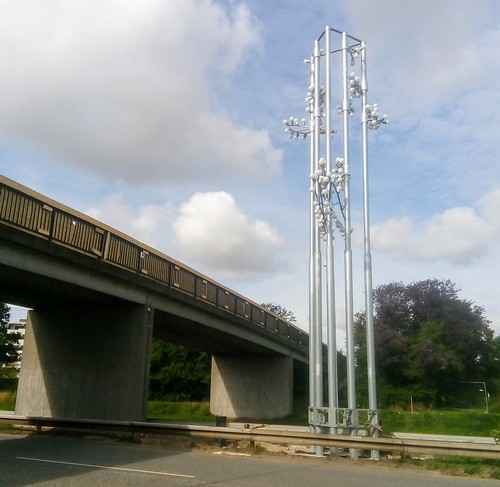