First in an attempt at trying out different formats for our outings. This one intended as a quick 500 words based around DG’s Pollards Hill geography field trip – writing with constraints?

Location: a corner of Christianshavn right of Torvegade (approached from town); map & Flickr

For once no shortage of physical geography: a triangle of land bounded by Torvegade, the vold (ramparts) and the canal, a bite of the Christianshavn pasty reclaimed from the sea by Christian IV in 1619, the terrain here is completely manmade. A view of Cirkelbroen (the Circle Bridge) and Den sorte Diamant (the national library extension) is offered from the canal’s right-angled turn. Flights of steps lead up to the rampart and two bastions, offering views of Amager and a rare chance to get above street level.

Human geography: a tight network of narrow streets is lined by apartment blocks from various eras, interspersed with institutions and organisations. This spells hazard, with shared space confused in the absence of commonly agreed norms between over-entitled cyclists and skittish pedestrians, often tourists.

Torvegade itself, widened in the 1930s as the highway to the airport, offers the additional hazard of motor traffic — an experience on a different scale. The road is lined with large modernist blocks on the far side, with a square on the near side offering the usual uncertain vacancy of public space. 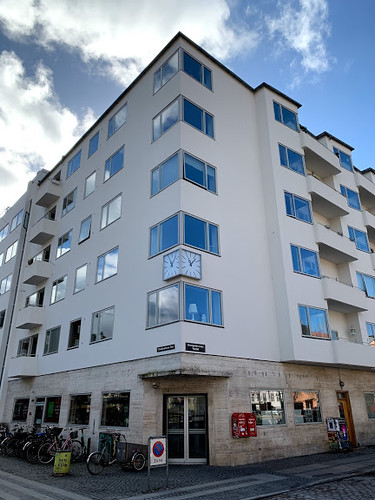 The rampart and bastions were handed over to the council by the military in 1925. Of the two bastions found in our corner, Panteren (The Panther) was once home to a former military training facility, but is now converted into luxury flats and gated. A footbridge leads across the moat to Amager Boulevard. Elefanten (The Elephant) previously known as Møllebastionen, was crowned by a windmill from 1670 to 1842, but is now occupied by a playground.

The torv is home to the city’s Greenland Monument from 1938, the unofficial meeting place for Greenandic migrants. It also houses one of the few remaining telephone kiosks from the 1890s.

More 1970s heritage tucked away on Dronningensgade and Sofiegade, once the scene of demonstrations against slum clearances, now with a squat transformed into a grassroots-driven community centre and a public bath-cum-health-mecca. 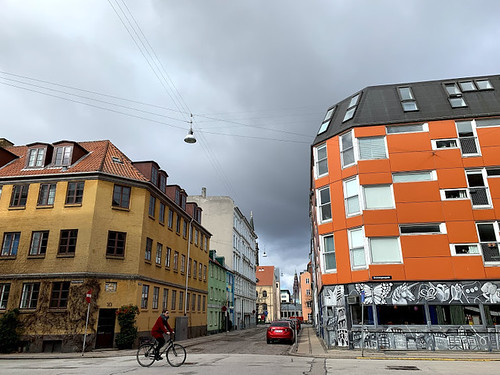 Conclusion: surely featuring in every guide to Copenhagen, Christianshavn exudes the authentic charm – and hygge – that is an increasingly rare find in the city centre but expected by your average city breaker. The gentrification seen to the north-east of our corner has not yet reached this cul-de-sac, which retains traces of its hippy past and offers facilities mainly targeted at its residents. But børnefamilier were sighted, so it’s probably only a matter of time until this hidden corner emerges in the style of CPH 2019.

Verdict: more than enough to exhaust a place.