A trip to the garden centre offered the chance to tick off a shiny new building as well as the opportunity for a FRB vs CPH compare and contrast exercise, this week inspired by DG’s recent Walsall vs Solihull jaunts.

The new version retains some of the look and feel of the Bauhaus-inspired original, but with less elegant features including Skiven (The Slice), a 20m high concrete wall covered with porcelain tiles and with 500 small windows, running the whole way round the building, and some out-of-scale landscaping to the front. 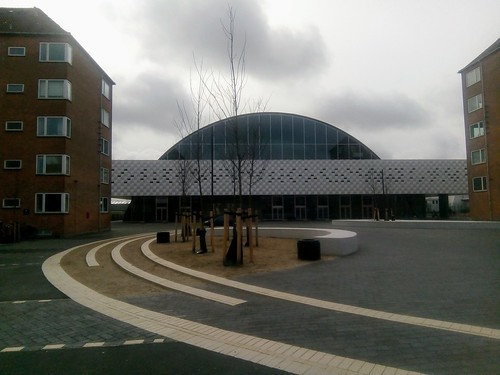 Out of shot: Knud Nellemose’s Fodboldspillerne, a statue erected to celebrate the centenary of Kjøbenhavns Boldklub, the oldest non-British football club in Europe (surely: the world). Variations of this statue can be seen in various spots around CPH and beyond.

And on a Sunday morning, behind the ample car parking, this being Frederiksberg, it was football all the way, a gateway to a large open space speckled with sports facilities, once the largest sports ground in Europe.

Strolling even in the wild west of FRB brings modernist housing on a grand scale, wide roads and a real urban feel–the cityscape of the  by i byen is very different from its rather larger host, with unique street furniture. 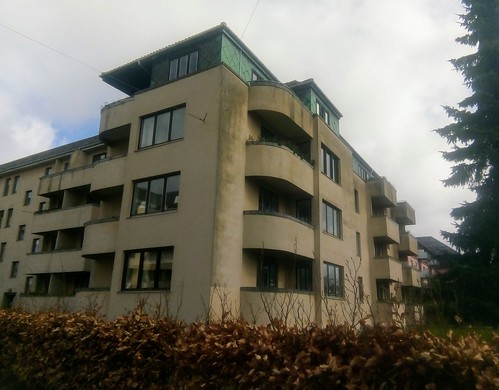 On the other side of the railway line is Valby, a CPH suburb, which, like last week’s Christianshavn, retains pockets of old school charm. Langvaddam, running off Damhussøen, was once part of a royal way on the road to Roskilde. Today it’s a cherry tree-lined path cutting across five streets, one now an incongruous arterial road, lined with early 20th century murermester villas, several crumbling and in need of renovation.

This lost corner of Valby to the north of Roskildevej has a slightly offbeat feel – we spotted the name plate of children’s entertainer and musician Sigurd Barrett on one funky looking house (with loud labrador). (It’s really easy to find out where people live in Denmark; you just Google them.) 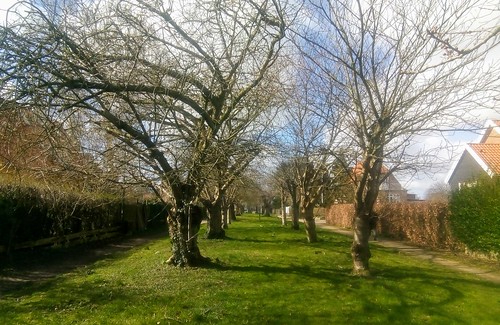 Back in the mists of time both Frederiksberg and Valby were part of the same pre-kommune as Hvidovre, breaking free around the turn of the last century and going rather different ways. If FRB were a London borough it would be Kensington & Chelsea, simples. Valby is more tricky; let’s go with Lewisham. Hvidovre is Croydon. (The London borough game is a good one; try it with ex-Soviet republics.)