The toilet: a city convenience

No more sitting on the bench – here’s a Danish toilet break, for your convenience.

In the centre of Copenhagen there’s a district informally known as Pisserenden. This “cosy grid of streets” (TM: Lonely Planet), is named after the historic concentration of horse-employing distilleries which once flourished in the area, and remains apt for the city centre streets every Friday and Saturday night, when it’s not just the drink which is flowing. And that’s the story really – a not uncommon tension between the Denmark that shits in its own house and the Denmark which is big on design.

Back in the day, 1999 to be precise, author Knud Romer put together a slim guide to Copenhagen’s public toilets, pissegode and otherwise, funded by a pharmaceutical company concerned with urinary issues. (It would seem Knud is a bit of an expert in the field, both theoretically and no doubt practically, as he wrote his thesis on the history of the public toilet in Paris*.)

A bit laddish in places and now mainly an entry in the How Copenhagen Has Changed canon, with free toilets in ferry departure lounges on Havnegade and a hydrofoil to Malmø leaving from Nyhavn, Knud’s guide does provide some handy factoids.

Sewerage came to Copenhagen in 1903, with a handful of public toilets opened in 1907. Around the same time green pissoirs on the Parisian model were installed at strategic points outside public buildings such as churches, courts and prisons, notable for the ointment jar decorations on top. 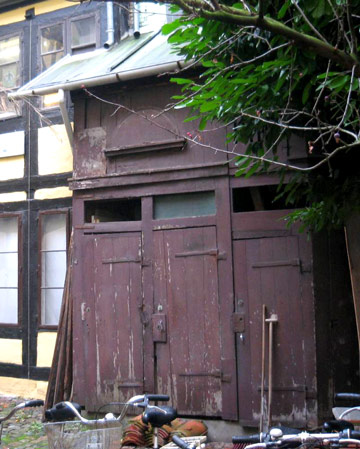 the lokum on Krystalgade, listed since 2010

The public toilets were built in the nether regions under the pavement and have become part of Danish cultural heritage. During the Nazi occupation a group of Jews hid in the Nyhavn loos for days, until they were smuggled to Sweden.

I can’t say I have ever spotted said loos – we’re back in subtle signage country. Until I read Knud’s guide when nature called I had hurried unknowingly past the historic facilities on Amagertorv into Illum, Macdonalds or some other suitable destination. On inspection it turns out that the Amagertorv Ladies is a fine, if invisible, confection in mahogony and brass, complete with attendant, and amazing! free of charge. Allegedly visited by a wised-up 50K/month in the summer, a total only beaten by those toilets at Nyhavn.

From the green pissoir to computer-operated design toilets (2kr for 15 minutes) doubling up as advertising søjler, a sign of the times.

So just where are CPH’s public toilets? Right here, with a layer under rent praktisk on Københavnerkortet. Eternal beta FindToilet.dk (Tine Muller) presents an alternative view of the data, demonstrating that it’s not just a male thing, and that there are even toilets outside the capital (Frederiksberg & map).

As I discovered to my discomfort, you can only gain access to the toilet at Valby Station if you have a mobile subscription and can wait for the automated system to send you an entrance code. The toilets at the central station were last updated in 2012, costing DK 5 a go. This news story does not relate whether the world famous blue lighting, which made it impossible for addicts to find a vein, has been replaced.

Here are my toilets on Flickr, plus Gary Shteyngart on the Danish toilet: