Consisting of a 100m bridge (the world’s longest?) and 700m path, it’s quite an impressive construction, making a pleasant stroll between the two attractions. Surprisingly, both were closed, and the only sign of Friday’s activities were a couple of abandoned portaloos. Kroppedal does however have a Viking exhibition on offer, and the project website (story) boasts an app with Google map showing Viking sites in the area and a film. New: Vikingebro: the book. 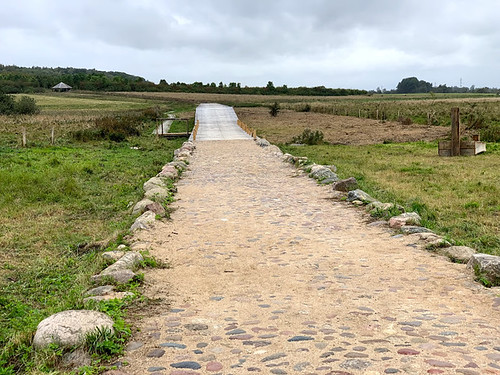 Far from a tabula rasa wating to be relandscaped and populated after WW2, in the ninth century AD this area was an important Viking settlement, with easy access to water and the sea in the shape of the Køge Bugt. This forgotten heritage is in the process of being rediscovered, with not least the excavation of Vikingborgen, a ring fortress near the Lellinge motorway junction.

I tend to bypass Vikingery, done and dusted for me in Primary 2 and manifesting itself mainly as outdoor attractions focused on dressing up and family-oriented hygge, but where it hits the landscape it’s a different matter.

Despite being surrounded by motorways and encroaching development, the old villages nearby retain a rural feel, and the now 50 year old Vestskoven is beginning to feel established. It’s all a world away from new town Albertslund and the well-rehearsed prejudices usually cast at Vestegnen.