Around 18 months ago I spotted a milestone on Gammel Køge Landevej, outside a car showroom on the side of the road leaving town. Unusually, it appears to mark the distance from somewhere, in this case Copenhagen’s town hall, rather than the distance to somewhere. Who would need to know this? A similar stone two kilometres further down the road, behind a screen shielding some houses from traffic noise, marks 9 km. 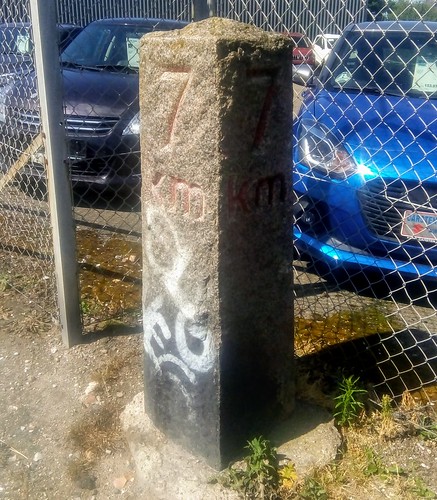 And if Gammel Køge Landevej is the old road from Copenhagen to Køge, why do the milestones look so modern? The answer lies in the fact that today’s Køgevej is not the only road with a claim to that title; the first road from CPH to Køge ran north from here, but few traces remain. Today’s GKL was in use from 1720, following the building of a bridge over Harrestrup Å at Flaskekroen (now Åmarken), until around 1786, when it was superseded by an inland route via Roskilde and Taastrup, over terrain less prone to flooding.

By the late 19th century the coastal route was not much more than a footpath, but times changed after WW1, with the growth of motor traffic. The coast road was upgraded to a modern concrete paved road from the late 1920s, completed in 1935, and heavily used by residents of inner city Copenhagen, who followed the road from Valby to Køge by rutebil/omnibus or bicycle during the summer holidays for a day at the seaside. The landscape changed again with the building of the Køge Bugt Motorvej, which reached GKL in 1980.

The history of Copenhagen’s milestones is just as tortuous. The main roads out of the city were marked with the distance to the closest market town, with some of the oldest set up at the end of the 17th century under the guidance of astromer Ole Rømer. Further milestones were erected with the development of the road network during the 18th century, usually with the king’s monogram, or with a postman’s horn.

Denmark adopted the kilometre in 1907. To mark the occasion the splendidly named Foreningen til Hovedstadens Forskønnelse opened a competition for the design of a kilometre stone in 1910. The competition was won by no less than PV Jensen-Klint, the architect of Grundtvigs Kirke, probably Denmark’s best (only?) brick Expressionist building. Which explains the simple, but classic, design of our GKL ‘milestones’.

Thanks to Slots- og Kulturstyrelsen on Facebook for the info! For much more about the introduction of the kilometre stone see Dansk Vejhistorisk Selskab.