Since I last updated this post over three years ago we’ve been back to NV a couple of times, to the refurbished Efterslægten and Utterslev village green, and to visit the gable-end murals on Rentemestervej – see Flickr for pics and further info. Our latest visit was sparked off by a sighting of minimuseum nordvest, a temporary local history museum, on Facebook.

My inner urbanist tells me Nordvest should be the area for me, with that urban grit and diversity missing elsewhere in the city, but yikes! It’s bleak out there. I even voiced the shocking thought to my partner that “perhaps I am done with cities”.

Possibly due to the weather, the familiar between-season grey chill, or to the effects of prolonged lockdowns, our walk had no coherence, and the jewel in the crown, the parade of industrial buildings on Rentemestervej, looked as if a bomb had hit it. So much for gentrification, but what will be the future for peripheral areas such as this post-Corona?

See foot of post for some linkage and further info on spots worth a closer look – if in another three years.

Nordvest is being talked up as Copenhagen’s next gentrification hotspot. While it’s possible to get some vague Shoreditch/Brick Lane vibes in the former industrial quarter around Rentemestervej, there’s a long way to go. Old school bodegaer are still to be found, for heaven’s sake.

Most of the gentrifying action is concentrated around the Frederiksborgvej/Rentemestervej crossroads. Part of Copenhagen’s 1901 land grab, the area which is now postcode 2400 was rapidly transformed with endless streets of blank five-storey blocks serviced by trams ferrying people between home and work. By the 1980s the heavily polluting factories which had sprung up here and there were as good as gone. With the area designated for the rehousing of people with mental illness in the community, Nordvest became known as Nordvaerst (from north west to north worst).

Farvemøllen, a former paint warehouse at Dortheavej 4 now housing a sound studio or two, is part of the gentrification charge. On the other side of the road at Bispevej 29 is the David Risley Gallery, in a building previously used as a repair shop for police cars. Interviewed in November David said that Nordvest fitted rather better with his world view than the gallery’s previous location on Bredgade in the heart of the happy city centre. He aims to involve the community in gallery events in the future – the gentrification conundrum in a nutshell. 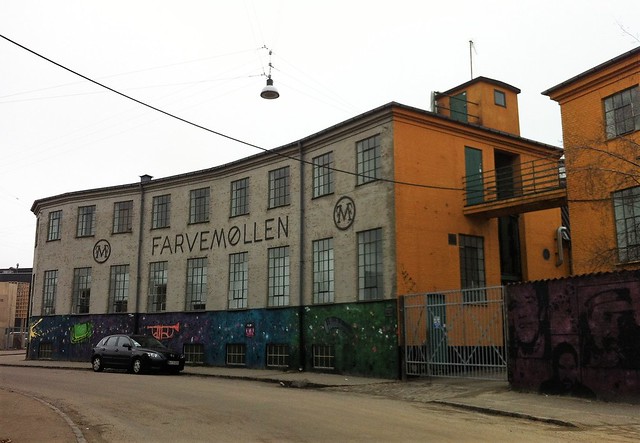 The streets of Lygtenkvarteret offer a cavalcade of housing from københavnerlejligheder to 1970s council blocks with an almost suburban level of stillness, but without the accompanying lys og luft. Architectural gems are to be found – the eight brick blocks on the odd numbered side of Bogtrykkervej provide an interesting contrast to the kiddy reliefs on the karré on the evens side.

A further cluster of former industrial buildings lives on around Skaffervej. At nr 8/Bygmestervej 2 (1936) is the Forlagshuset kontorhotel, incorporating ‘gastronomic oasis’ Tribeca NV, while the former ink factory at nr 4 (1938) has housed Sjakkets Aktivitetscenter since 1995 (its 2004 renovation by Bjarke Ingels of BIG was funded to the tune of more than DK 20 million by Realdania and other deep-pocketed philanthropists). 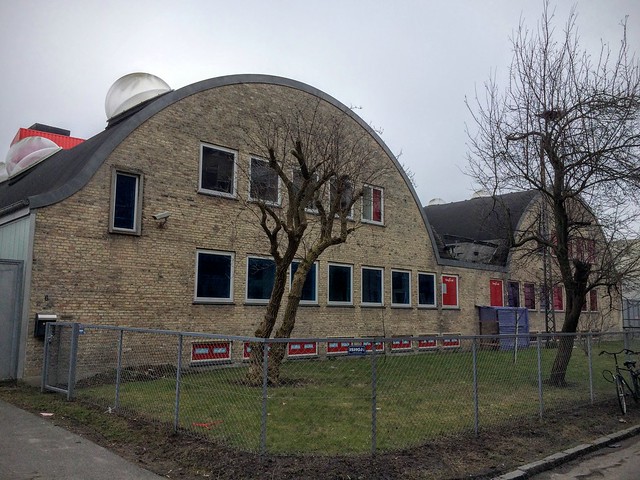 Back on Rentemestervej finds one of Denmark’s few industrial buildings in funkis style, a former factory from 1934 by Marx Ishøy which housed Denmark’s first bakelite factory. NJ Plast closed in autumn 2003, and the building was lovingly converted to offices in 2005 by contractors Rasmus Friis, preserving much of the internal layout. 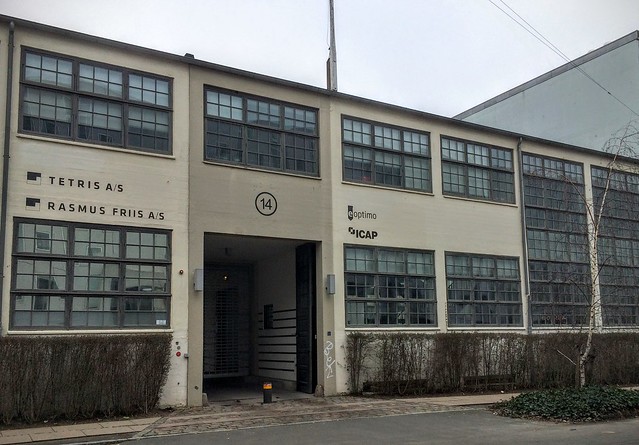 Such a sensitive renovation could hardly stand in bigger contrast to Emaljehaven (2007) on the other side of the road. On the site of the former Glud & Marstrand metalworks, the development follows Copenhagen vernacular in taking the form of a five-storey closed karré, but with open entrances on three corners giving views of the large green space behind. The prizewinning clunky facade is broken up on the inside by balconies and roof terraces, and on two of the corners there are cafés. Facing the heavily trafficked crossroads is a not very appealing lund (grove).

Described as an ‘oasis’, a self-contained community like 8TALLET in Ørestad, it’s a trophy building for the fortunate few, despite the nod to affordability with one third social housing. And a punch in the face to everyone else. 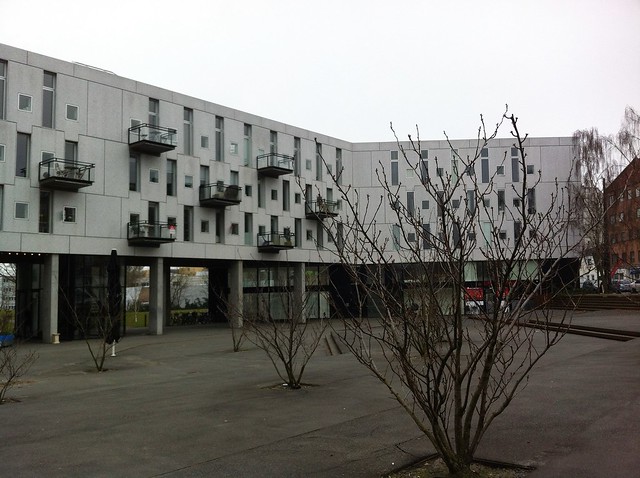 More successful is Biblioteket Rentemestervej (2011), a truly luxury-class library by COBE stuck on the side of the former kulturhus, itself converted from a former warehouse, with murals from HuskMitNavn:

a space that is more than just a place you go to find books – the building also works a village hall, a community center and an urban space uniting the neighborhood…at ground floor, there’s a children’s library, then a youth library, a library for adults and finally on top, a concert hall. The different volumes are connected with staircases and in the space between the boxes, are multi-purpose areas.

Part of the kulturhus has since 2008 housed Ungdomshuset, which replaced Jagtvej 69 in Nørrebro.

COBE’s shiny box concept is due to make a return at Ragnarock, Denmark’s new rock museum in Roskilde, shortly. 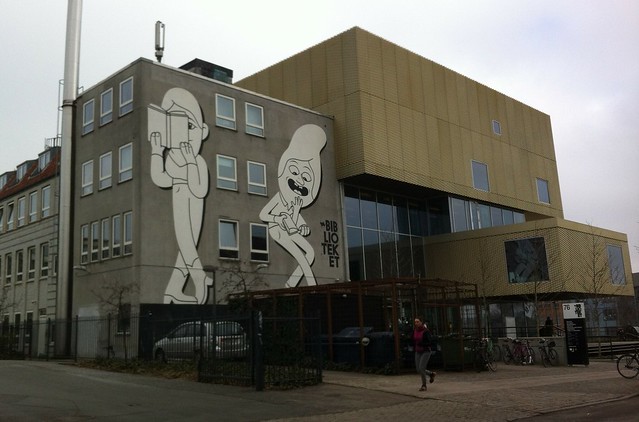 After riding various waves of urban renewal the current plan for Nordvest appears to be to become a bit more Berlin (finally!), breaking up the endless parade of housing blocks with lots more greenery (there’s currently barely a tree to be seen), wider pavements, small shops and more cultural offerings.

Shading into the northwest suburbs of Copenhagen but increasingly looking inwards rather than outwards, Nordvest is an edgeland on the cusp. The pending arrival of the metro at Nørrebro may well have sealed its fate as a haunt for the creative classes – performative walks and street art have already been sighted on Nordre Fasanvej to the south. All the same it could well take another 10 years before house prices and hipness reach the heights of Nørrebro, and Nordværst becomes Nordbedst.