Landmarks: the modern house in Denmark

Landmarks: the modern house in Denmark

Updates: June 2017: several of the houses below are featured in a fun article on why movie baddies always live in modernist houses, and Michael has now published a tome on Louisiana (English); March 2021 reprint

Picked up on this coffee table book by Michael Sheridan somewhere or other. The library duly obliged.

Sheridan’s landmarks are 14 ‘single-family houses’ from the 1950s and early 1960s, “cultural landmarks designed to become part of the natural setting with an intimate relationship to the landscape”, dubbed humanistic modernism:

Simple and unpretentious forms, the celebration of craft and organic materials, a profound attention to human comfort…at once rational and romantic, sober and sensual, elegant and economical, deeply humane.

The houses, and the book, are indeed lovely things, if set to be filed under ‘Exclusive’.

Sheridan opens proceedings with an extended essay on the development of the detached house during the 20th century. As we have seen, unlike in Germany most architects in Denmark rejected “the industrial aesthetic and clean break with tradition” of 1920s modernism, remaining focused on neoclassicism. The origins of Danish functionalism can instead be found in the 1930 Stockholm Exhibition, with Erik Gunnar Asplund as chief architect. Asplund’s vision was of “a warm, sensuous modernism grounded in the experience of the individual” and a Romantic view of nature.

The Danish translation of this ‘humanistic’ version of modernism idealised the garden rather than the factory and was based on a vernacular ideal. Said Kay Fisker (perhaps “the most influential Danish architect of the 20th century”):

We strive after an architecture that serves people, which conforms to nature and isn’t intrusive, on the contrary; it tries to be anonymous.

This explains a lot about Danish architecture, if not Denmark itself, right up to the present day.

Anyway, after 1932 the yellow brick box with asymmetrical windows and a gently pitched roof became the model for the detached house in Denmark, based on Fisker et al’s design for Aarhus University.

‘Funkis’ developed further after WW2 with the adoption of ideas about space and structure from the US and Japan. During the 1950s houses were frequently financed by state loans, restricting the floor area to 130m and limiting construction costs. Hence bedrooms were small and corridors largely eliminated, replaced by a communal living area oriented towards the garden.

In place of the brick box with windows these houses were conceived as a set of independent elements. Load-bearing walls were constructed from brick and timber, with open frames connected by large areas of insulated glass. Structural elements were often left exposed, with ceilings, interior walls and floors covered with untreated wood, stone tiles or natural fibres.

The end of the 1950s saw the closure of the state loan scheme, and the Danish housebuilding industry began to embrace standardisation and prefabrication in the shape of the typehus. Buyers could select their new home from a catalogue or a group of model houses, often erected as part of a competition or exhibition. Two architects, Henrik Iversen and Harald Plum (nephew of maverick WW1 profiteer Harald Plum), developed a series of 12 IP Typehuse of assorted sizes. Hundreds of IP houses were constructed up to 1985, with Iversen and Plum working with local builders to ensure quality.

The early promise of the typehus was however quickly overwhelmed by economic factors, with uniformity replacing innovation. More than 450K typehuse were constructed around Denmark over the course of 20 years, built at the rate of 50 per day, typically in clusters of around 20, and transforming both the landscape and society. These houses were long, rectangular boxes resting on a concrete slab, with prefabricated wooden roof trusses. Brickwork was reduced to a set of freestanding walls that sometimes extended beyond the interior, with gaps filled by windows.

So much for the diversion into mass housing. Sheridan presents 14 ‘landmark’ houses from the period in loving detail. Most are still private homes, with a handful saved for the nation by Realdania (English), who then let them out, in what always seems to me a bit of a weird move.

The earliest house presented is Jørn Utzon’s house (1952; Arkark) in Hellebæk just north of Helsingør. It was Utzon’s first completed work, and remained his base for the rest of his life. Also by Utzon is the House on Stilts (1953; Arkark) built for interior designer Svend Middelboe, raised one storey to make the most of the lakeside views.

Some architects employed creative solutions to get round the size restrictions imposed by the state loan scheme. Eva & Nils Koppels’ house (1952; Arkark) for the appropriately named heating engineer Jørgen Varming in Gentofte had a double height living area, while Karen & Ebbe Clemmensens’ house (1954; Arkark) in Jægersborg (“near a heritage-listed bog”, says Realdania) added a studio to the living area.

Sheridan includes two houses by Erik Christian Sørensen, who later embraced Brutalism and was responsible for not least the 1969 Viking Ship Museum in Roskilde, now, alas, in need of renovation. His own house in Jægersborg (1955, Arkark) featuring load-bearing outer walls offering flexibility, a gently (30 degree) pitched roof covered with felt, and, unusually for Denmark, no cellar, was much copied by typehus builders, while the house he built for for Mee Tholstrup (1955; Arkark) on the hyper-desirable Rungsted Kyst sold in late 2014 for DK 6 million.

But the most fabulous house in the selection for me is Knud Friis’ house (1958, extended in 1970; Arkark) in Brabrand on the edge of Aarhus, dubbed “early ‘mild’ Brutalism” – no doubt the neighbours dubbed it The Bunker – run a close second by Arne Jacobsen’s house for Erik Siesby (1959; Arkark) in Sorgenfri. On the other hand Halldor Gunnløgsson’s house (1959; Arkark) on Rungsted Strandvej tips over into oh-so-sterile Scandi.

I’m also less moved than many by Bo & Wohlert’s Louisiana, it’s just too staged, and the same can be said for the house they built for Arne Bøgh Andersen, aka the Ambassador’s House (1961; Arkark), also on Rungsted Strandvej, a modified version of Ønskehuset from a 1959 exhibition. Wohlert is also represented by an extension built for no other than physicist Niels Bohr’s summer house (1957) in Tisvilde, taking timber to its limits.

Better is the Bendix-Harboe house (1959; Arkark) in Charlottenlund, built by Knud Peter Harboe (1959). Knud gets a post in Graham McKay’s Misfits series, well worth a look, with pics also of some of the other ‘landmark’ houses.

Sheridan’s oversized baker’s dozen is rounded out by:

All bar one of the 14 houses are situated north of Copenhagen, in the so-called Whisky Belt, a favoured area for architects rather like Peredelkino for writers near Moscow. While it’s fun reading up on the architects and building a picture of the connections, there’s also mileage in keeping an eye open for less illustrious versions locally – as it happens our house was modelled on a competition house of the period and exhibits several now familiar features, such as a closed frontage with large windows opening onto an extensive garden, and a flexible interior, evidenced by the marks where internal walls have been put up and taken down. A fair few modernist inspired gems have been found on our daily walks as well. 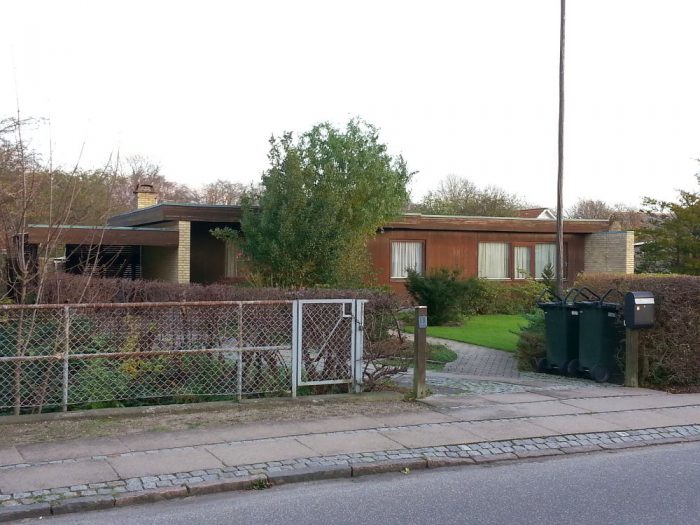 Landmarks is also available på dansk as Mesterværker, published by Strandberg in 2011, with an accompanying TV series.