A short walk through a corner of Naturpark Amager, examining its spatial configuration, how its usage has been shaped in the interests of the capital, and how this has impacted on its future role vis-à-vis nature and edgelands. (crib)

Naturpark Amager is the latest name for the area previously known as Vestamager, a wedge of land on the western side of the island of Amager, reclaimed from the sea in the 1940s and held in place by a 13km dyke and a network of drainage channels.

The coastline around Copenhagen rarely stays stable for long. In this case it took little more than half a century for a reclaimed wetland to be canonised as nature.

It may be no distance from here, but the only way across south of Sjællandsbroen is the motorway, landing you at best in Ørestad, This ‘nature park’ is designed as a playground for inner city CPH, with a family-friendly entrance just south of the latest in modern housing.

A wilderness experience is not on offer, rather a regulated grid of ramrod straight paths and barbed wire, evidence of the area’s heritage as a military zone, punctuated by picnic shelters and playgrounds. A litter picker was spotted, as well as a lively flock of barnacle geese.

We parked at Ugandavej, in Tårnby’s African quarter, constructed and batch-named at the height of Denmark’s suburban roll-out down Kongelundsvej. An edgeland under the flight path of Copenhagen airport, settlement becomes gradually more sparse before running out entirely, unfashionable and definitely not on brand. Rhodesiavej has not been renamed.

We passed through the red gate marking the old coastline and headed down to the junction of Ugandavej with Svenskeholmvej, named for one of the islets which previously broke through the waves of what is now a narrow channel. more a river than a sea.

We continued down Ottehøjvej to the Skovhøj picnic spot, then on to heavily-trafficked Granatvej for a short stretch, before hanging a right down Svenskeholmvej and back onto Ugandavej – no chance of making it as far as the sea, that’s for sure. Instead, the horizon is trapped by the towers of the Ørestad skyline, neither nature nor city. 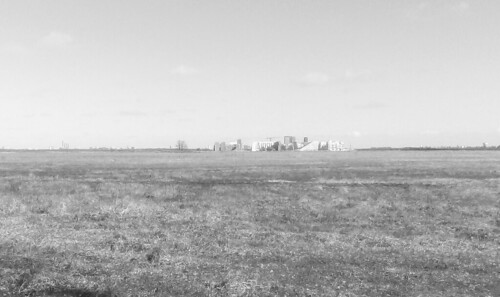 Naturpark Amager covers one third of Amager, all of which is rather bigger than it looks, taking in two commons (Amager Fælled, Kalvebod Fælled aka Vestamager), a wood created as a breeding ground for birds destined to be hunted by the king (Kongelunden) and the Sydamager coast. In the middle of a seven year period of development running until 2020, which will see three new entrances and four new ‘facilities’ constructed.