At anchor in Trieste

A fan of borders and edges (and the Austro-Hungarian Empire) I’ve had Trieste on my bucket list for years. Writing in 2001 in her book Trieste and the meaning of nowhere (Amazon) Jan Morris comments: “People who have never been there generally don’t know where it is. Visitors tend to leave it puzzled and, when they get home, remember it with a vague sense of mystery”, while Michael Palin quotes Churchill: “From Stettin in the Baltic to Trieste in the Adriatic an Iron Curtain has descended across the continent”.

Trieste is no longer at the edge of a divided continent and is gradually getting a little more normal, a little more Italian – now known as the ‘insurance centre of Italy’, with a period of consolidation from 2000 under a mayor who was head of the Illy coffee company – but traces of the city’s colourful past are everywhere, and it retains its appeal.

Originally an Illyrian coastal village, Trieste was colonised by Rome and occupied by Venice and France before being protected and declared a free port by the Habsburg Empress Maria Theresa, turning the city into a major link between Europe and Asia. In 1918 the city came under Italian rule, with Mussolini making it one of his showpieces. The city was annexed by the German Reich and then occupied by Britain, the USA and Yugoslavia, briefly becoming an Independent Free Territory under the UN. In 1954 the city of Trieste returned to Italy, while its surroundings were handed to Yugoslavia, but today the Slovene language has official parity with Italian, and even before 1989 there was widespread movement of local people across the border.

How to capture such a city? Jan Morris describes Trieste as a loitering kind of place, perfect for drifting. Itinerari Trieste covers architecture (styles: neoclassical, eclectic, Art Nouveau; themes: Roman, religious, Jewish, historic cafes), most of which are also vailable on the Trieste Citypod app. I didn’t find this little treasure trove until we got back – the tourist office operated in a definite “if you ask for it, you can have it” mode, with everything tidied neatly away behind the counter.

The train, the end of the line as far as Trenitalia is concerned, cuts through the limestone rock of the karst/carso and descends in a sweeping curve around the top of the Adriatic to the sea, past the 14th century Duino castle rising in front of the oil refinery and shipyards of Monfalcone and the old Hapsburg station at Miramar, now back in action after closing in the 1950s. From the station it’s a 10 minute walk down the riva to the city centre, past the 1930s Stazione Marittima, now providing the backdrop for cruise ships, and the molo Audace, named for the ship which claimed Trieste for Italy in 1918.

High on the hill the 14th century Romanesque Basilica of San Giusto and the Hapsburg Castello Giusto guard a sort of monument square with accompanying Roman forum, offering views of the harbour and the hills towards Venice. 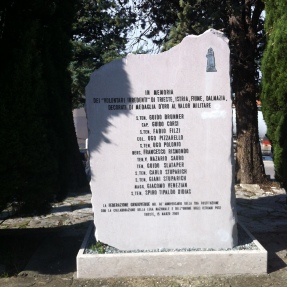 We also took in the 1934 courthouse, the centrepiece of monumental urban planning in this area of the city, Piazza Oberdan, the first piazza to be planned after Trieste became part of Italy, Narodni Dom, the station, the Gothic Lutheran church, Audace Pier…

Trieste is marking the WW1 centenary with an exhibition on the city in 1914, held in the Magazzino delle Idee, a derelict warehouse turned cultural centre on the Corso Cavour. This was very well done with some wonderful photos. One room gave a detailed account of Franz Ferdinand’s return and funeral procession (for the outward leg see Telegraph article):

We also visited Risiera di San Sabba, a former rice husking facility used by the Nazi occupation forces as prison camp from 1943. In April 1944 a crematorium was installed and made operative. The only facility of its kind in Italy, it is now a national monument. 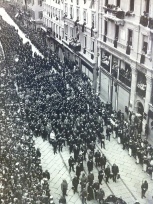 crowds in the square 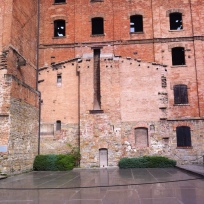 Pietà representing the smoke spiralling out of the crematorium chimney

The castle of Miramar, 8km from town down the Lungomare, a concrete seafront promenade, was built on a whim by Archduke Maximilian, Franz Josef’s younger brother, in 1860. Maxmilian’s story, and that of his wife, Charlotte of Belgium, is unbearably sad – why hasn’t it been made into a film (update: biog)? Max was the shortlived Emperor of Mexico, executed in 1867. Charlotte went mad and went home to Belgium where she lived to the age of 87.

Next up, Prince Amedeo of Savoy-Aosta, a first cousin of the King of Italy, lived at Miramar with his wife and daughters during the 1930s and renovated the castle in best modernist style. Viceroy of Italian East Africa during WW2, Amadeo surrendered to the British and died in a prison camp in Nairobi in 1942.

The castle has acquired a sinister reputation – it is said that all who sleep within the castle’s walls will die violently far from home. As well as Maximilian and Amadeo two American generals suffered untimely ends, and during the occupation at British general choose to sleep in a tent in the garden. So probably best that it’s now a museum and setting for wedding photos. 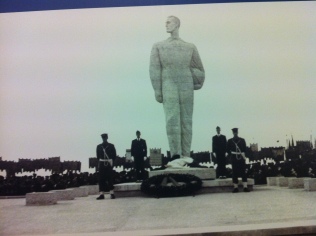 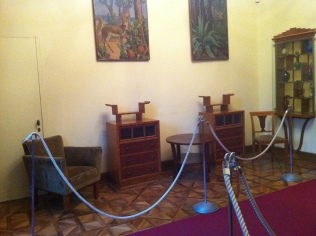 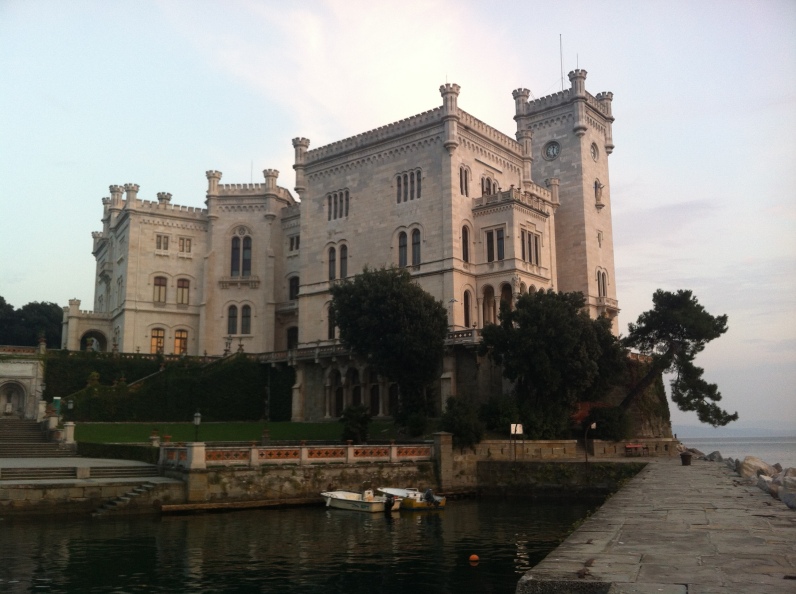 The Opicina tramway, opened in 1902, refurbished and reopened in July 2014 complete with bike racks on the front, links the city centre with the plateau and on to the border with Slovenia. To ascend the plateau after two minutes it transforms into a drogue (funicular). Complete with beige Hapsburg lighting the tram is a complete delight, if looking slightly out of place on the highway into Slovenia.

Allegedly, if you get off the tram at the Obelisk and follow Strada Napoleonica along the cliff after 3km you reach the village of Prosecco-Contovello, inhabited mainly by Slovenes, from where it is allegedly possible to walk down to Miramar, although the locals looked at us askance when we asked how far it was.

Trieste is the capital of the Friuli Venezia Giulia region, one of Italy’s richest. The region has a long border with Slovenia to the east, with Trieste sticking out like a cartographer’s error, plus one with Austria to the north. Among other local delights are Aquileia, an ancient Roman town, Cividale, dating from the medieval Lombards, and the fortress town of Palmamova, which looks like the model for a GBBO entry.

I’d love to explore further, not least because of the history – tossed between Venice and Austria-Hungary, a bridge between Italy and Mitteleuropa, you know the drill. The town of Gorizia (pop: 35K) featured in Dasa Drndic’s Trieste and looks particularly worth a visit – after the 1919 Paris peace conference the border between Italy and Yugoslavia ran through the main town square, renamed Europe square in 2004 when Slovenia joined the EU; see the British Library on bringing the town’s history back to life. This time though we took a train to Udine, pretty much on a whim, making a fascinating discovery in the shape of Torviscosa, a planned town built during the 1930s. From there we picked up the night train from Venice to Munich, followed by an eight hour slog up to Hamburg, where we gave the boat train to Copenhagen another outing. One of those 24 hour journeys…

2021 update: Europe by Rail report a direct train from Trieste to Vienna, via Ljubljana