So, after making some advance connections, what of Sofia, “on the frontier between Europe and Asia, a mélange of East and West, Orthodox and Ottoman, with a dash of communism thrown in” (Telegraph); “a chaotic melting pot of Euro, Russo and Ottoman culture” (Wanderlust)?

The city has a colourful and complicated history. Founded by the Romans as Ulpia Serdica in AD 29, it became a major regional capital under Constantine the Great. During the Middle Ages the city passed back and forth between the Bulgars and the Byzantines until the Ottomans captured it in 1382, holding on for nearly 500 years. In 1879 Sofia became the capital of newly independent Bulgaria, and a hectic period of building followed. The early 20th century saw two Balkan wars and a brace of abdicating kings, before the city was flattened during the Second World War and rebuilt under the Soviet model, following the pattern of compact old town encircled by a ring road and tower blocks, in this case overlooked by Mount Vitosha.

Sofia today has over 1.3 million inhabitants. For Eva Hoffman visiting in 1993 the city’s “ramshackle, neutral tenor” appealed: “the undemanding, modest size and scale or the teasing combination of Eastern European elements and strong, southern heat and light transports everything into a different modality…Sofia looks like a cross between a rather dilapidated provincial town in Eastern Europe and an equally dilapidated provincial town in Italy or Greece.” While its low built neighhourhoods have a “characteristic characterlessness” the faces are varied:

Tall, lean women with disctinctly Slavic features and a bony stylishness; men with very dark eyes and beards who look like models for Byzantine icons or covers of Harlequin romances; Orthodox priests in black, capacious robes; and Pomaks, or Bulgarian Muslims, in cowl-like head-dresses. The human brew seems thicker, more pungent here, as if created by a long-brewing history.

Since 1989 some streetnames have been “resuscitated from the pre-Communist pantheon” and now honour those previously denounced as “Fascists, Monarchists, Capitalists and Enemies of the People”. There are “rows of trees, green fields, pizzerias, shopping malls and children’s playgrounds” covering up “the stark childscape of mud and concrete” on Kapka Kassabova’s Street without a name (really, I could quote the whole thing).

Arriving in Sofia around lunchtime, after the first salad-with yoghurt-on-the-side of many (for a vegetarian the food is great if a bit one note – there’s only so much yoghurt and feta you can eat in a day), we contrived to spend the entire afternoon beyond the bottom end of the main drag of Boulevard Vitosha, exploring every nook and cranny of NDK, the 1981 National Palace of Culture, now housing a range of cultural agencies 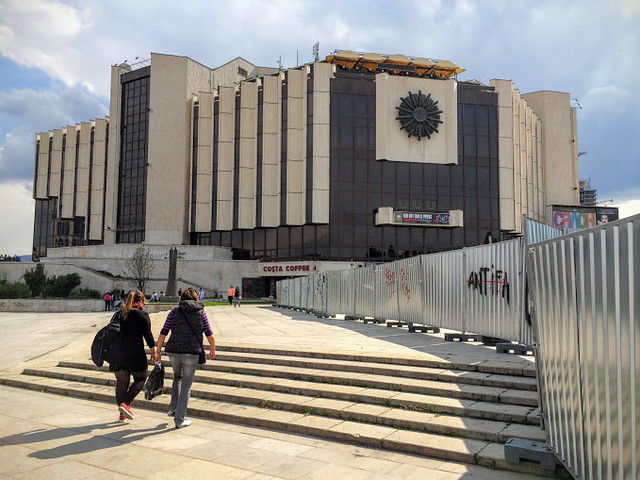 Kapka: “I spent many happy formative hours there, gaping at festival films and classical concerts”.

Proof positive of the difference history makes, NDK is full of memories, held in affection and still evolving…public space on the grand scale, with a dazzling use of materials, scale, narrative. The “gloriously long row of malfunctioning fountains” outside was under redevelopment, while the “giant grey wreck of a monument”, built in record time in 1981 to commemorate the 1300th anniversary of the First Bulgarian Empire, is a bit of a headscratcher. No winner was selected from a 2014 competition to replace it, but amid calls to reinstate parts of the 1934 Sofia Pantheon, destroyed by Allied bombing in 1944, it seems likely to be on the way out.

After all that the Soviet war memorial, built in 1954 but missing the Georgi Dimitrov mausoleum and spattered with graffiti, was a bit of a disappointment. Post 1989 the mausoleum was used for performances of Aida and 101 Dalmations, but in 1999 the government decided enough was enough and set out to blow it up, forgetting that the thing was built to withstand a nuclear attack. Rapidly becoming a running joke, it was eventually dismantled piece by piece, a pleasing metaphor for a period of history that just won’t go away.

Lenin has also been moved from his prime spot in the city centre, now occupied by a statue of Sophia dating from 2001, 24m of bling. Multiple Lenins can however be found in the Museum of Socialist Art, outside the city centre incongruously overlooked by a new mall. Opened in 2011 with EU funding, the museum boasts 77 statues from 1944-89 in a sculpture park, including plentiful examples of Georgi Dimitrov, accused of complicity in the Reichstag fire in 1933 and Bulgaria’s first Communist leader. 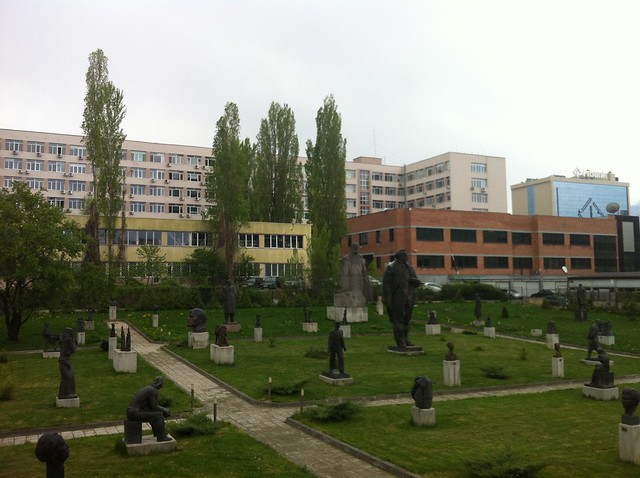 Places of worship abound, from Sveta Nedelya church at the top of Vitosha where 150 were killed in an attack on Boris III in 1925 to the Banya Bashi Mosque (1576) and the synagogue (1909; biggest in southeastern Europe and third biggest in Europe), the tiny but evocative 4th century St George’s Rotunda, the twin beasts of the 6th century St Sofia’s church and the Russian-built behemoth Aleksandâr Nevski Cathedral completed in 1912, honouring the 200,000 Russian soldiers who died in the Russian-Turkish war of 1877-78. We also popped into a Roman Catholic church, a Romanian church and St Nicholas’s Russian church (1914), took photos of a wedding and attended an X Factor style talent show in a 19th century theatre for good measure.

At every turn it seemed there was another neo/Byzantine pile, offering a place to linger. Other public spaces of note included the newly refurbished Mineral Baths (1913) next to the mosque, with hot mineral water on tap to the side, and Halite, the 1911 market hall. Like many buildings in the city it covers layers of history, housing some Roman remains in the basement. More intimate are Graf Ignatiev and Slaveykov squares in the heart of the old town.

The Largo, a Stalinist complex of government buildings, now blends in without attracting undue attention and is most notable for the Ruritarian uniformed guard outside the presidential palace. The former royal palace at Ploshtad Battenberg is now an art gallery. More problematic are the five floor TSUM (1956), Sofia’s answer to Moscow’s GUM, practically an empty shell, and the 1970s station, as in Bratislava in need of sensitive redevelopment. Modern architecture is arriving, not least in the shape of the 2006 Mall of Sofia, while the latest metro stations are stylishly done: 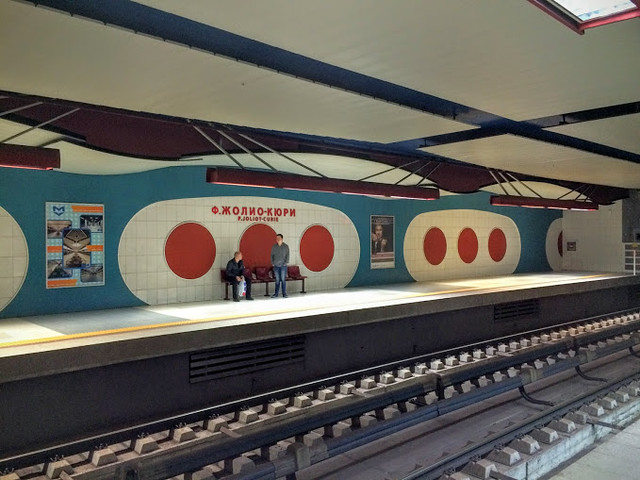 The pedestrianised Vitosha offers splendid views of the eponymous mountain, a 2290m high skiing spot only 15km from the city centre, tricky to photograph. To get a bit closer we took a bus and trolley bus ride to the 10th century Boyana church, decorated with 13th century frescoes, protected by Queen Eleonora, the second wife of Ferdinand I, and now by UNESCO, and the National History Museum, housed in a 1970s government residence and kicking off another marathon photo session: 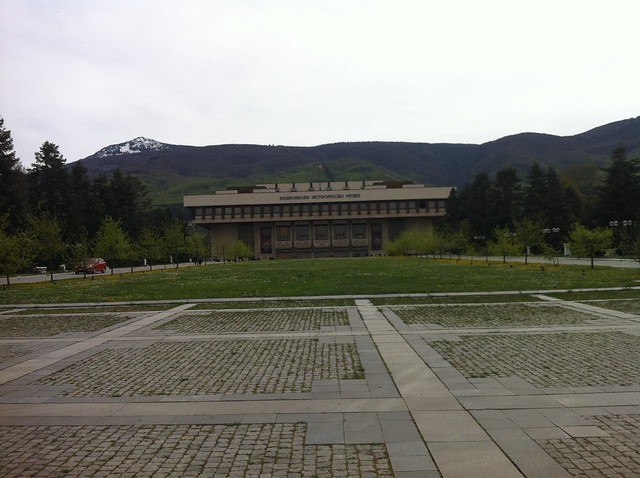 National Museum of History – should have bought that postcard!

The museum does its level best to explain Bulgaria’s complex history through a stonking range of exhibits, but which quite possibly raised more questions than it answered (Kapka and her classmates also struggled with History). The Royals are more than a little perplexing, with the owner of the patriotic shoes below, now Simeon Coburgotski, working as a business consultant in Madrid with a Spanish wife, having left Bulgaria clutching his mother’s hand in 1946. He returned in 1996, attracting little attention from the ‘socialist’ government, touring wineries and generally having a good time, before becoming prime minister from 2001-05. 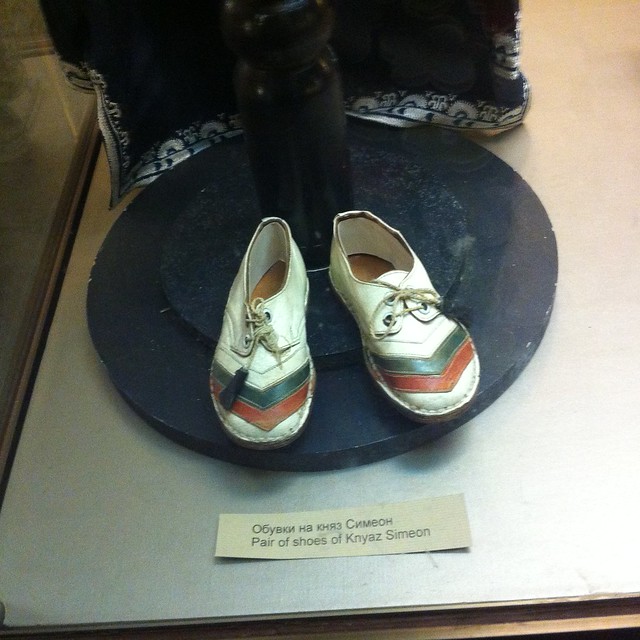 Sofia is the sort of city I can imagine falling for in a big way, a magic place. And Bulgaria, criminally under-valued, is now one of ‘my’ countries. I can’t wait to go back.

One thought on “Some Sofia highlights”