Vestegnens Kulturuge is usually almost exclusively family-oriented, but this year it turned up some ‘high’ culture in the shape of a subset of events around 1980s poet Michael Strunge amidst the broader theme of PÅ ELEKTRISK GRUND (sic; FB).

Sadly though much of the week was a wash-out, grey and chilly with prolonged rain and some slushy hail to finish. Two events were cancelled: Mosens Dag in Vallensbæk, due to the bog/marsh, which acts as a flood basin leading water away from nearby houses, being completely underwater, and Copenhagen Art Run in Ishøj Strandpark, deemed unsafe due to the conditions.

Where last year there were giants, this year there was Tryllebundet (Spellbound), six exhibits in containers showing the latest in digital art, coordinated by Vallensbæk’s DIAS Kunsthal. As well as the works themselves DIAS put together a number of accompanying activities and a handy Google Map of the area’s public art. 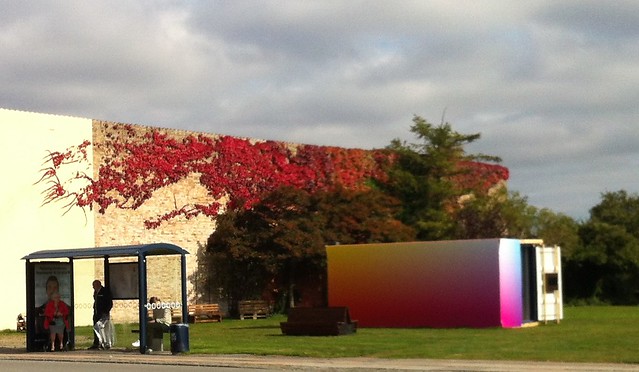 Forstadsmuseet had a Hvidovre-based game (with notebook and pencil; update: got my hands on this analogue artefact, developed in conjunction with Play Agency – looks very impressive), plus re-runs of some walks, while Rødovre opened up its bunker, a kommunale kommandocentral under Arne Jacobsen’s library, who knew, as part of its Cold War project.

Each of the six kommuner had its special day, largely unrelated to the overall theme, made up of events organised by local foreninger with the communal culture centre as venue. Hvidovre, perhaps making up for the lack of a shiny culture centre while we wait for the new bymidte, mounted two special days, pushing the boat out on the second Saturday of the ‘week’ in Hvidovre C with a range of events including a 12 hour mindfulness themed soveconcert (Sleep Concert), from GoSlow and sound artist Karsten Pflum. Gosh.

The previous Saturday was centred around Hvidovre town hall at the opposite end of the kommune. This included readings in Risbjerggård from personal fave Søren Ulrik Thomsen, a contemporary of Michael Strunge, and Caspar Eric (from Hvidovre?), very much inspired by him (2018).

Other Strunge-related events included several riffs on the title of his 1984 collection Væbnet med vinger:

Michael Strunge (1958-86) was born in a clinic in Rødovre (also the location of Denmark’s first punk gig by Sods in 1977) and grew up in Hvidovre, specifically Berners Vænge, on the modernist Bredalsparken estate. He went to Sønderkærskolen before attending Vestre Borgerdyd Gymnasium on Sjælør Boulevard in Valby.

Between 1978 and 1985 he published 11 collections of poetry, most of it written in a flat he shared with his girlfriend in Hvidovre. He died in 1986 at the age of 27, like his heroes Hendrix, Joplin and Morrison, jumping out of a window at Webersgade 17 in Østerbro (plaque), and is buried in Assistens Kirkegård.

A figurehead for his generation and usually dubbed a ‘punk’ poet, but we’re not really talking John Cooper Clarke here:

Søren Ulrik Thomsen was born in Kalundborg in 1956 and spent most of his childhood in Stevns, but at the reading admitted to living on Arnold Nielsens Boulevard from the age of 2-6, in one of the red and white blocks at the Hvidovrevej end. He knew Strunge well, although was careful to stress that they were very different in personality.

[and I see before me the Hvidovre of forty years ago, which with its small self-built houses and open spaces between the tower blocks was probably the first suburb, both historically and geographically, with all that entails: sweet dreams of a little black Beetle and a television and all in all a better life than that lived for example in Vesterbro, which Hvidovre may be a relocation of]

Perhaps the suburbs still have an authenticity of time and place, less found in today’s Happy CPH. In København con amore (2006), the product of trips to the outer reaches of CPH with photographer Jokum Rohde, SUT presents photos of two very local spots, Hvidovrevejens Partyslagter at Hvidovrevej 277 (now Pangs Smørrebrød), while Lis’s Kaffebar at 340 C is now occupied by Hot & Cool and French Chicken. Things are changing, even in Hvidovre.

Back to Strunge with Vestegnens KulturCast, an enthusiastic effort from Vallensbæk Kultur- og Borgerhus, with two dedicated episodes plus full interviews with Anne Marie Mai and Jørgen Aabenhus. The second episode has readings from Asger Schnack in Taastrup Bibliotek and from school students in the 9th class in Vallensbæk. All well worth a listen.

In 1985 AMM and MS published Mai Strunge, a book of their conversations and letters. She followed this up in 2008 with an anthology, En bog om Michael Strunge, on what would have been his 50th birthday, co-edited with JA. In her interview she stated that MS was an ‘anarkistisk kameleon’, unconstrained by fashions/styles in poetry and uninterested in socially engaged poems with a message.

JA examined MS’s relationship with life in the suburbs, not least as reflected in his 1981 poem COMA, observing people waiting at a bus stop on Hvidovrevej. At that time Hvidovre was very homogeneous, middelmådig and småborgelig, a poster child for the velfærdssamfund – and a prime case for teenage rebellion. There’s a tension here with hygge, of which I’m guessing MS wasn’t a big fan, but as JA pointed out hygge is more likely to be found in the home than at a bus stop.

By way of contrast, when asked a brace of Vestegnen residents named the slower tempo of life, which you notice as soon as you get off said bus, vs too much traffic, too many people and the lack of greenery in the city, as the advantages of living in the suburbs today.

More Strunge? see Litteratursiden, which also has a recent feature on 1980s literature, and biographies by Knud Munck (2001) and Peter Rewers (2015). For more SUT, see People vs place in Copenhagen.